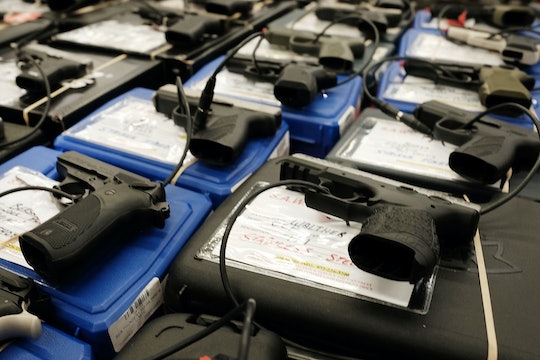 Are Guns Allowed At The Republican National Convention? The New Rule Seems Hypocritical

The gun-loving folks over at the Republican National Committee have, along with the National Rifle Association, long promoted expanding access to weapons, including state open-carry laws, which allow people to walk around their communities brandishing a weapon. One such "open-carry" state is Ohio, the host of this year's Republican National Convention, which is kicking off this week in Cleveland. Based on the RNC's platform position that guns make Americans safer, you'd probably assume legal firearms would be a welcome addition to the party. Are guns allowed at the Republican National Convention? Well, it turns out the Secret Service doesn't think more guns equal a safer event this year after the officer shooting in Louisiana that left three officers dead, according to CNN.

But isn't banning guns at the single biggest gathering of gun advocates a little hypocritical, especially when the NRA has argued for years that the only thing that can stop a bad guy with a gun is "a good guy with a gun"? Just take a look at the GOP platform position on guns:

We support the fundamental right to self-defense wherever a law-abiding citizen has a legal right to be, and we support federal legislation that would expand the exercise of that right by allowing those with state-issued carry permits to carry firearms in any state that issues such permits to its own residents. Gun ownership is responsible citizenship, enabling Americans to defend their homes and communities.

In fairness, guns are only technically banned from the convention floor; they are going to be legal throughout other areas of the "event zone." CNN reported that while guns are allowed in many areas, there are a few way less dangerous items that are banned outright from the convention, including tennis balls, lasers, slingshots, and light bulbs.

Sometimes what works in politics doesn't work so well in real life.

The head of the Cleveland police union is worried about guns too. Police Union President Steve Loomis said he is appealing to Ohio Gov. John Kasich to declare an emergency and hit the pause button on Ohio's open-carry law because having people walking around with guns in plain sight is making police officers' jobs "much more difficult," according to USA Today.

"Somebody's got to do something," Loomis said. "What we have now is completely irresponsible."

Unfortunately, Kasich responded through spokeswoman Emmalee Kalmbach that the governor doesn't have the authority to "arbitrarily suspend federal and state constitutional rights or state laws," according to the USA Today.

There are 31 states in the U.S. that allow the open carry of guns, according to the Law Center to Prevent Gun Violence. Those laws are thanks to the tireless efforts of the RNC and the NRA and have left communities awash in weapons. These weapons are being turned on co-workers, school children, young people in nightclubs, and, most recently, police officers.

It's galling that Republican politicians aren't willing to assume the same risk of danger they've imposed on communities with open carry gun laws. Children have to travel through neighborhoods full of armed people to get to school. Police officers have to deal with armed people all the time. But Republican lawmakers are banning guns from the convention floor in order to keep themselves safer. It's a sad hypocrisy that makes it clear what lives are most important to lawmakers.