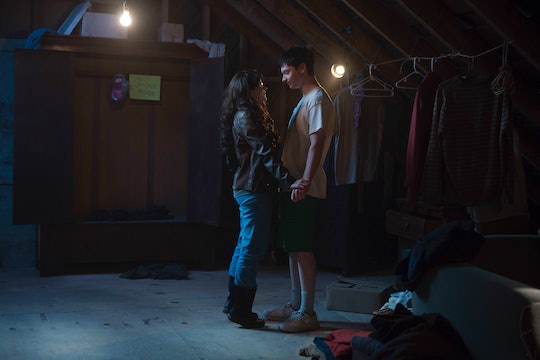 Gypsy Rose & Nick Godejohn Have Different Perspectives On Their Relationship

After watching Gypsy Rose Blanchard and Nick Godejohn's relationship unfold on Hulu's The Act, viewers may find themselves wondering about the real people who inspired the show. The intense online relationship between Blanchard and Godejohn took a turn when they decided to kill her abusive mother Dee Dee in order to free Gypsy from her control. Now both of them are in jail, but are Gypsy Rose and Nick Godejohn still together?

They aren't, and not just because they can't see each other in prison. According to People, Gypsy pled guilty to second-degree murder in 2016, though she was allegedly hiding in the bathroom while Godejohn stabbed her mother. She received 10 years and will be up for parole in 2024, per Refinery29; in February of this year, Godejohn was sentenced to life in prison without parole. They spoke to ABC News separately in 2018 about their relationship, and they had different perspectives on what happened.

Blanchard compared Godejohn to her mother, explaining that they were both very controlling. She felt his motives for going through with the crime were selfish because he wanted her for himself. "I feel like I was trained my whole life to do as I was told, and I feel like he wanted that for a girlfriend," she said. But she didn't hate him; she felt sorry for him.

However, Godejohn told ABC News that Gypsy was the one who did the majority of the planning for the crime. He felt that she had "pretty much willed the knife" into his hand and called her the "mastermind behind the entire thing." Despite being hurt by Gypsy, there was a part of him that still loved her and possibly always would. "I guess you could say my feelings got the best of me," Godejohn said. "I ended up loving someone way too much."

In April 2019, there were reports that Gypsy had begun a relationship with someone else. A family friend named Fancy Macelli told People that Gypsy had gotten engaged, though at Gypsy's request she didn't share the fiancé's name. Their relationship began when he saw a documentary about Gypsy and then reached out to her over email. They wrote to each other for a year and a half, though they did meet in person when he came to visit Gypsy in jail. "[This relationship] is a good thing for her," Marcelli said. "And whether it ends up being that way in the end no one knows, but for her right now it’s a very positive and happy time."

Macelli also spoke to E! News on Gypsy's behalf, and the site shared photos of Gypsy wearing a borrowed, temporary engagement ring. Macelli revealed that Gypsy and her fiancé were waiting until her release to get real rings and tie the knot. The engagement was still recent, but Macelli noted that while Gypsy was very excited, she was being practical about the decision to get married. None of those statements were directly confirmed by Gypsy herself, however.

It seems like Gypsy and Godejohn's relationship is over, and she's ready to move on with the rest of her life.