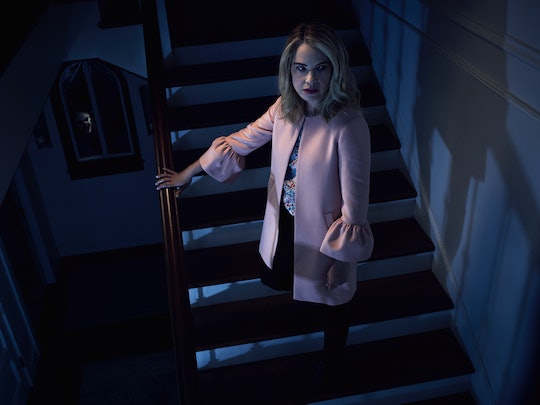 Ally's New Neighbors May Not Be As Friendly As They Seem On 'AHS: Cult'

On American Horror Story: Cult, it seems like Meadow and Harrison Wilton are up to something — though just what they're planning remains unclear. After happily moving into the murder house formerly inhabited by the Chang family, they set up shop with all their Nicole Kidman memorabilia and hives of buzzing bees. They act open and friendly, but if anything that just makes them seem more suspicious. There must be something deeper going on beneath their cheery facade. What are the Wiltons hiding? Are Harrison and Meadow working with Kai on AHS: Cult?

While there's no confirmation in the first two episodes that the Wiltons are working with Kai, they are connected to him from the moment they're introduced. "Don't Be Afraid of the Dark" revealed that Harrison and Meadow were the ones who filmed Kai being beaten by a group of workers in the premiere. However, the Wiltons left out some key information in their video: they didn't start filming until after Kai had finished taunting the men, so it seemed as though the attack was unprovoked when the opposite was true. Making Kai look like the victim allowed him to build the narrative that would boost his political career. If Harrison and Meadow aren't working with Kai, then why would they help him?

Unfortunately the evidence is still circumstantial. Perhaps Harrison and Meadow stumbled upon Kai at the exact moment he was being beaten and missed everything that came before. It could have been a perfect storm of coincidences that helped Kai out and demonized the men he'd been goading into fighting him. Maybe it was an unplanned confluence of events that took the Wiltons into Kai's path, then led them to the house across the street from Ally and Ivy.

Or maybe not. This is American Horror Story, after all. There are no accidents here, just connections that haven't been fully revealed. If Meadow and Harrison were responsible for launching Kai into the public eye, then it stands to reason that they were doing so on purpose. The fact that they moved close to a woman Kai is already targeting only adds fuel to the fire. The full plan might not have been laid out yet, but the connections are tough to ignore.

Harrison's beekeeping job could be another hint that he's in on Kai's growing cult, too. In Episode 2, Harrison rhapsodized about how every bee in the hive knows its job and does it without question. That's the kind of thing someone in a cult might find admirable. Perhaps his job (and Meadow's by extension) is to set the wheels in motion that will allow Kai to rise.