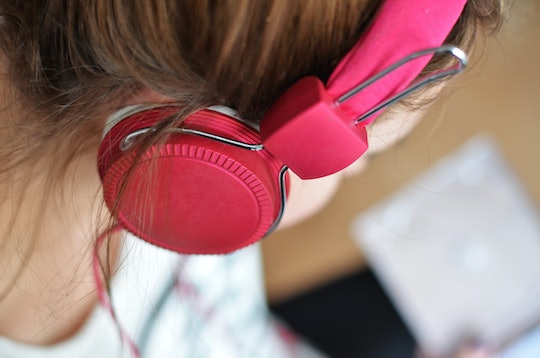 Are Headphones Safe For Kids? New Report Claims They Could Lose Hearing

When it comes to kids, headphones can be a life saver for parents. On long car rides, the last thing a parent wants to hear is "Let It Go" playing from their kid's iPad for the hundredth time in a row, after all. Headphones are the perfect way for kids to keep the activities rolling, without giving their parents a headache or disturbing others who are looking for a little quiet. Unfortunately, a new report claims that headphones might be a bigger problem than previously thought, prompting parents and caregivers alike to question, "Are headphones safe for kids?" Unfortunately, it seems the answer to that might not be good news.

As it turns out, headphones are safe for kids, as long as they regulate sound to acceptable volumes. The Wirecutter, the electronics review website owned by The New York Times that ran the study, recently tested children's headphones and found that 15 out of 30 pairs of headphone marketed as safe for children did not actually restrict volume to safe limits.

In other words, headphones are perfectly okay for kids to use, if the sounds coming through the headphones are being regulated, and not on full blast. According to The Times, children should not be listening to loud sounds for long periods of time anyway, as it's the volume and length of the sounds that causes the damage. The louder the sound, the shorter period of time kids should listen it. The report also found that half of the headphones tested did not regulate volume at all, and the worst offenders "produced sound so loud, it could be hazardous to ears in minutes."

According to The Wirecutter, most children's headphones claimed to limit volume to 85 decibels — the level the World Health Organization reports as the safest volume for eight hours of listening. However, when tested, the headphones exceeded those decibels.

For perspective: Loud sounds above 85 decibels can be heard in day to day life, without headphones — according to The Wirecutter, the sound of a hairdryer measures at 100 decibels. So while parents can't protect every sound that enters their kids ears, when it comes to what their kids are choosing to listen to, parents should pick a pair of headphones that are safe enough to limit injury. The best headphones for kids have volume limiters or built-in resisters that stop kids from listening to loud volumes, even when they turn the volume for their device up to full blast.

According to ParentalGuide.org, the most important thing to remember when it comes to kids using headphones and ear buds is volume control and exposure to the sound. Parents should make sure that their kid's music, movies and TV shows, or video games are being played at a reasonable level too, and that their kids are taking breaks during long listening periods. According to The Times, there's no pair of headphones guaranteed to completely do the job of limiting volume like a parent will, so the next time your child wants to listen to the Moana soundtrack on repeat, set the device's volume at a lower, reasonable level before allowing them to plug in their headphones.