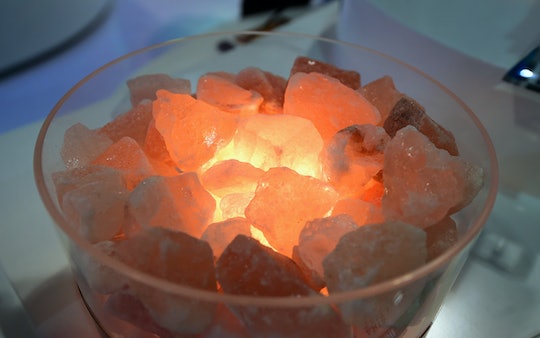 There are a lot of things that we buy for our health and beauty regimes that probably don't really work, but we do them anyway, because someone like Goop founder Gwyneth Paltrow told us to. No judgement out there. But after a company recalled a batch of Himalayan salt lamps, this well meaning, ion-giving home good might be doing more harm than actual good. After being pitched as a healthy way to light a room (and serve as a dim, not-too-bright night light) it's worth wondering whether Himalayan salt lamps are safe for kids or not. Or anyone in the house really.

The United States Product Safety Commission recalled any Lumière brand Himalayan salt lamp bought from Michaels between July 2016 and November 2016 (ask your aunt where she got yours for the holidays while you can), because "the dimmer switch and/or outlet plug can overheat and ignite, posing shock and fire," according to its statement. So, that's not all that safe, but it probably has less to do with the Himalayan salt part of the lamp and more to do with faulty production and materials than the actual "Himalayan salt" part.

Long story short, if you're loving having a Himalayan salt lamp in your kid's room, it's likely not any less safe than any cheap lamp you have in the house.

Himalayan salt lamps are supposedly actually made with Himalayan salt, which is pink in color and makes for a great looking lamp. When you put a heat producing bulb in it, it allegedly ignites all the minerals that are to be found in salt and it gives off healing negative ions. I know it sounds counterintuitive — but the negative ions supposedly interact with with the positive ions around us at all times and make us feel better — again, supposedly. If this sounds like something a lifestyle guru made up to trick privileged people into buying something, I'm gonna go out on a limb and say that's probably about right.

Then again, there are many people who believe in the healing powers of the lamp. The ions are apparently supposed to lower your blood pressure, decrease your risk of heart attack, and reduce the risk of strokes (please take your blood pressure medicine along with your lighting your lamp). The light and the ions also help you sleep better. The lamp's negative ions are also supposed to counteract all the electromagnetic fields that the electronics in your house create.

According to Snopes, this is all pretty much made up. The salt is a natural ionizer, but there aren't enough ions to have any real effect on your health and scientists aren't even sure that negative ions have health benefits. Diehards who love the lamps will surely disagree and suggest that the lamp "not working" is connected to the authenticity and quality of the salt from which the lamp is made. It's up to you to decide how much you want to spend on a "real" lamp for your health.

There is one thing for sure about them — Himalayan salt lamps make great night lights for kids (as long as they don't catch on fire), because of their color. And if the negative ions actually do work, that means kids will sleep better throughout the night. Hey, when it comes to tiny tots and their sleeping schedules, anything is worth a shot.