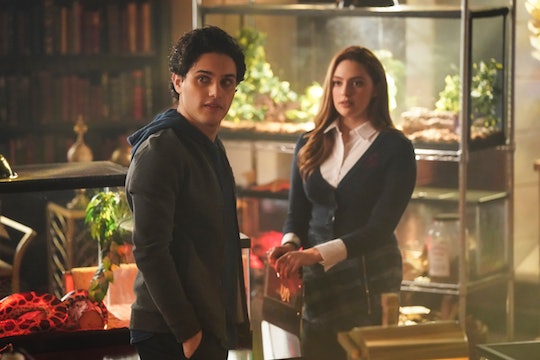 Hope & Landon's Romance May Take A Hit On 'Legacies'

Believe it or not, Legacies Season 1 finale is right around the corner, and with so many mysteries coming to a head, the episode should be exciting. But alongside the supernatural drama, there are some major love triangles that still need to be sorted out. Landon knows that Hope is hiding the truth about his mom, so fans are wondering if Hope and Landon are broken up on Legacies.

As a Handon shipper, I certainly hope not. Their love story has been evolving since they met in Season 5 of The Originals, and now that they finally started dating, I’m really betting on them making it work. However, I do know that in world where monsters and magic rule, their chances of being a normal couple are grim. Not only did Hope erase Landon’s memory of his mother, Seylah, which is already enough to cause a rift in their relationship, Landon’s biological connection to Malivore is sure to create some conflicts of interest between them.

Fans may not get a clear answer about Hope and Landon’s relationship status in the finale, because showrunner Julie Plec admitted that the episode would end with some cliffhangers. “The end of the season truly brings everything to a head,” she told Cinema Blend. We take Landon all the way, face-to-face…ish with his father. We really pay off Hope’s character and her journey from being solitary and not wanting any friends to being a girl in love who’s sort of built a squad around her — We leave a lot of questions, but it’ll be very clear that we’ve been building to a big reveal and a big moment, and we’re really excited about the cliffhanger.”

Hope and Landon really do love each other, so there will always be a tie that binds them, regardless of whether they break up or not. In an interview with Entertainment Tonight, actress Danielle Rose Russell (Hope Mikaelson), said that Hope’s love for Landon is a huge part of her character's development. “For me playing Hope, a really significant relationship for her is Landon and I enjoy playing a protagonist who is learning how to not be afraid to be vulnerable and showing that vulnerability with the world and Landon,” said Russell. “And I love playing romantic Hope, too. I would love to see that relationship go whatever which way. I think one of the beautiful things in her life is doing whatever she can for love.”

She also told the outlet that a lot of Hope’s evolution in Season 1 was centered around her getting over the pain of her past to find a way to love again, and Landon was a big catalyst for her progression. “In order for her to fully heal and move on with her life, she has to allow herself to love and have relationships in her life again, otherwise she would stay stagnant and a very boring character,” Russell told ET. “I really enjoyed playing that, especially with Aria and the whole Hope and Landon dynamic. To her, that is probably the most important relationship at the moment and I’m happy that we didn’t start the season with it being easy for Hope. [The whole season] definitely justifies where Hope should be and where Hope ends up. But it’s The Vampire Diaries universe and nothing stays happy forever.”

Russell is certainly right about that. The TVD and The Originals universe has seen some pretty epic love stories, but none of those relationships were easy, and many of them involved betrayal, death, and resurrection before they got a happy ending. It’s safe to assume that Hope and Landon will face numerous relationship hurdles going forward as well, and fans may have to wait until Season 2 to see how things pan out.