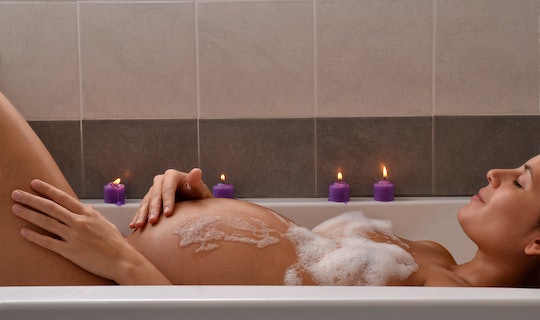 Pregnant Women *Can* Take Hot Baths After All, Study Says, But Here's What You Need To Know

My pregnancy has been dominated by intense lower back pain from around 20 weeks on and nothing has provided relief but scalding hot showers. As nice as a hot soak in the tub sounded, I resisted the urge to take the plunge out of fear of overheating myself and my little one. However, it turns out that hot baths are actually safe during pregnancy, according to new research, despite earlier advice that expectant mothers should avoid getting too hot. As the recent study reported, you can even hit the gym in warm weather without fear as well.

The University of Exeter analyzed the results of 12 studies published through July 2017 to determine the need for women to avoid exercising in the heat and refrain from using saunas and hot baths. The study review, published in the British Journal of Sports Medicine online, reported the core temperature responses of 347 pregnant women following heat stress — resulting from both physical activity and passive heating, like sitting in a hot bath, according to the Daily Mail. Experts currently recommend that pregnant women avoid overheating in light of concerns surrounding raising their core temperatures about 39 Celsius (about 102.2 Fahrenheit). However, researchers found that none of the women involved actually had exceeded that core temperature limit.

Considering these results, researchers recommend that pregnant women can safely engage in up to 35 minutes of high intensity aerobic exercise — at 80 to 90 percent of their maximum heart rate and at air temperatures of up to 25 degrees Celsius with 45 percent relative humidity. Additionally, they can also participate in water-aerobics in water temperatures between 28.8 to 33.4 degrees Celsius (83.84 to 92.12 degrees Fahrenheit) for up to 45 minutes, and sit in hot baths or hot/dry saunas of up to 70 degrees Celsius (158 degrees Fahrenheit) for up to 20 minutes, regardless of where they are in their pregnancy, without reaching the maximum core temperature.

Lead researcher in the study Dr. Ollie Jay, of the University of Sydney told HuffPost UK that risk from heat exposure is low, despite previous reports:

Health guidelines for pregnant women unanimously state that hot water immersion or sauna use should be restricted due to the elevated risk of maternal hyperthermia and the consequent potential impact on fetal development. However, our results suggest that heat stress risk is low.

Researchers also stated that they worried vague heat stress guidelines might discourage physical activity during pregnancy. The low energy levels and general discomfort that often come with pregnancy are enough to make working out seem like a chore. Couple that with a fear of overheating yourself or your baby, and it's tempting just to skip the workouts all together. And while the benefits of remaining active during pregnancy cannot be overstated, you should still take certain precautions when working out as an expectant mother.

Remaining hydrated is more important than ever during pregnancy, and extra water intake is necessary during workouts. Health recommends that women drink one cup of water before, one cup after, and one cup every 20 minutes throughout the duration of the workout. Additionally, you should avoid workouts that require you to lie flat on your back or stand up for too long. Moms should also be careful not to overdo it at the gym or risk losing their balance.

As for the hot baths or sauna soaks, staying within the recommended timeframes (no more than 20 minutes) and temperatures (158 degrees Fahrenheit) for immersion will keep heat stress from becoming an issue. As always, if you begin to feel ill or faint, it may be time to leave the tub. Now, if you don't mind, I'll be jumping in my own jacuzzi tub post-haste.

More Like This
Is It Safe To Keep Using Period & Fertility Apps In A Post-Roe America?
Barre Could Be The Low-Impact Prenatal Workout You Need
Keep Talking To Your Kids About Abortion — It's More Important Than Ever
Can You Do Zumba While Pregnant? Experts Weigh In