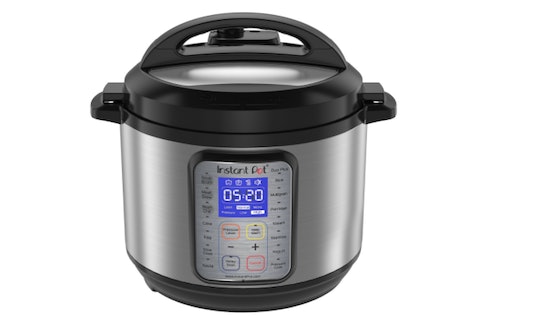 Guys, This Is What Happens If You Don't Use Your Instant Pot Properly

Chances are, if you are even a tiny bit tuned into the latest food fads, then you've probably heard all of the hype about the Instant Pot. But if you have no clue what this contraption is, don't worry. Basically, the Instant Pot's popularity begins with its boasted seven features in one streamlined machine. This handy gadget serves as a pressure cooker and slow cooker in one, and can even do a few stovetop tasks like steam and sauté. Besides answering what it can do, a more serious question remains: Are Instant Pots safe? For me, as a parent, all of the bells and whistles in the world don't mean anything in comparison to the health and well-being of my child and family.

When trends go viral, they tend to burst onto the scene with a whole lot of glitz and glamour, but little information is known beyond the surface. It's not until the buzz settles down a bit that consumers begin to critique and question the safety of these popular items. That's kind of what happened with the Instant Pot. It was a lifesaver and game-changer until stories of Instant Pot explosions spread across the country. But are these freak accidents that were just heavily covered? Or is this an assumed risk when dealing with a high pressure cooking device?

According to the official site for The Schmidt Law Firm, "the risk of an Instant Pot exploding is far lower than a traditional stove top pressure cooker because Instant Pots have more safety features, but explosions are not impossible." If the health hazard ranks towards the bottom, then how does an Instant Pot explode? "Any pressure cooker can blow up if the vent gets clogged, if the lid is opened too soon, or if safety features like the blowout preventer do not work," as The Schmidt Law Firm further explained. The causes of these explosions seem to be split between user error and faulty products. Fortunately, if you follow your Instant Pot user manual and check for broken parts, you should be safe.

Less scary than an explosion, but possibly just as dangerous is the presence of mold that could come in contact with food. According to the manufacturer's information, the Instant Pot sealing ring is made from food-grade silicone. And, as many reviewers have pointed out, these gasket-like parts retain odor and are difficult to clean. Beyond being a little gross or inconvenient, is there an actual underlying safety issue? According to a recent study published in the research journal Construction and Building Materials, researchers found that black mold (also known as Aspergillus Niger) grows on silicone and is nearly impossible to completely eradicate. That's why the safest recommendation seems to be replacing the fungal-infested item with a new, safer version, as opposed to just trying to clean or replace the part. Though this doesn't necessarily mean you should turn right around and chuck your Instant Pot in the trash, it is something worth keeping an eye out for in case mold develops, and properly allowing the appliance to dry out after each wash before you close the lid and stash it away until its next use.

If you happen to own one of the older Instant Pot models, then you should check to see if yours was recalled. The United States Consumer Product Safety Commission (USCPSC) reported the, "Instant Pot 'Smart' and 'Smart-60' electric pressure cookers recalled due to shock hazard." In these particular models, the USCPSC also noted, "the thermal probe in the base can conduct electricity throughout the cooker, posing a risk of electric shock." To put this in context, though, there were only three people who made this complaint. That's a relatively low number when it comes to safety recalls. So, in the end, it comes down to doing your research, staying informed, and being mindful when using a cooker, like Instant Pot, with such high pressure.

But these warnings shouldn't scare you off from snagging one of these beloved appliances for your own home. Seriously, many parents swear that its a lifesaver when it comes to making meals because the pressurized feature does what anyone could appreciate, especially parents: cook faster. As noted, and with any gadget, it's important to read the instructions carefully, follow them, and keep them well-maintained to keep your family as safe as possible.