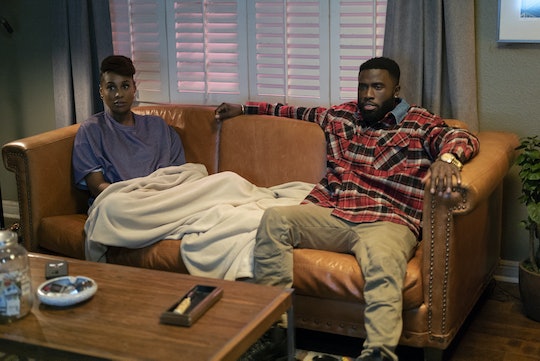 Issa May Rekindle An Old Flame On 'Insecure'

The wait is almost over, Issa Rae fans: Season 3 is almost here. The trailer poses a few burning questions for fans, but including: are Issa and Daniel dating on Insecure Season 3? It seems like a realistic possibility, for a few reasons.

First off, Issa and Daniel are now living together. While Issa is looking for her own place, it doesn't seem to be a successful search judging by the trailer. So now she's staying with Daniel until she can afford to move into her own place. Second of all, Lawrence is nowhere to be seen this season. Lawrence actor Jay Ellis hasn't filmed any scenes for Season 3 (as of April, anyway) — so it's safe to say that he's out of Issa's life at least for the front half of the season. This leaves a big gap in Issa's love life, and one viewers haven't seen before.

In the Season 3 extended trailer, viewers learn a little bit more about what's going on between Issa and Daniel — from Issa's perspective, anyway. She said things are going great with Daniel and that they're not sleeping together, but she can't deny that the thought crossed her mind. And that she's thinking about it a lot. Then there was a brief clip of Daniel going in for a kiss.

So, while Daniel and Issa aren't officially dating, it's also clear that they're a little more that just friends at the moment. At Vulture Fest this year, Issa Rae discussed her character and Daniel's connection. "I always have hope for Issa and Daniel. I feel like they’re connected," she said. "I feel like he’s seeing a side of her that Lawrence never saw. She has a history with Daniel that she never had with Lawrence. So that dynamic is interesting." So it sounds like at least Rae is shipping Issa and Daniel a little bit.

Y’lan Noel, the actor who plays Daniel, agreed with Rae. "I feel like we have never had a real opportunity to see whether they can make it work because of the external circumstances," he said at Vulture Fest. "There’s never been a full moment for them to really see that. That’s what’s exciting about Season 3." Personally, I can't wait to see how this plays out, whether it all falls apart or really works.

While I can't say that Issa and Daniel are officially dating on the show, I think they will continue to have a romantic or perhaps just a sexual relationship — judging by both the Season 3 trailer and what Rae and Noel say about their characters. For the Lawrence Hive, I'm sorry, but it seems like it's Daniel's time to shine. Issa can't seem to stay away from him seeing as he's been a part of every season so far. At the end of the extended trailer, Issa also commented that she's going to tell Daniel that she's going to stay at his place longer. I'm not sure where that falls in the season or what exactly will happen, but I'll bet money that their romance is rekindled, even for a brief time.