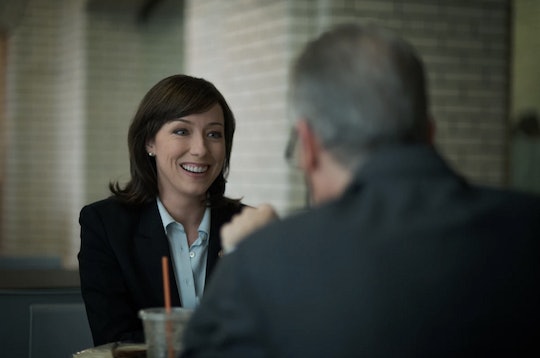 Are Jackie and Remy Dating On 'House of Cards' Season 4? The Two Have A Complicated History

One of the steamiest, and possibly most conniving relationships on House of Cards is the relationship between Remy Danton and Jackie Sharp. Their relationship began as a sex-fueled manipulation tactic, each trying to extort something from the other for their own personal gain. In Remy's case, he was trying to dig up damning information on Frank from his hand-picked (and decidedly not next-in-line) Majority Whip for the opposition. In Jackie's case, she thought that by seducing Remy, she might discourage him from giving his Republican bosses ammo with which to attack the Democratic leadership. (Spoilers from Season 4, Episode 2.) They have a very complicated relationship, so it is pretty confusing when it appears that Jackie and Remy are dating in House of Cards Season 4.

Early on in their relationship, Remy tells Jackie he needs her to either be all-in (ie., seriously committed and/or monogamous) or that he wants nothing at all. While it's unclear whether this is a manipulation tactic at the time (Remy has always been the softer partner), he does ultimately fall victim to his own feelings and betray his bosses by refusing to do his job in order to protect Jackie. He ultimately breaks it off with her, however, claiming she has become "too cold" as the Majority Whip.

In Season 3, we are treated to a late-night hookup between the two, long after their romantic relationship has soured. But with Jackie making a run for Vice President via a doomed primary run for President, she's already married her above-board doctor boyfriend, who so happens to come with a built-in family via two stepdaughters for her to adopt. Voila! An insta-family woman and thus, a much more viable presidential candidate, at least according to the show. Remy can't deal with being yet another politically ambitious woman's side-piece, so, after many longing looks exchanged, the pair decide they can't be together.

Yeah, right. It only takes two episodes of Season 4 for us to catch Jackie and Remy back at it again. Remy is now "retired" from "the game," while Jackie, in the middle of a tattoo-removal process, is still trying to polish her political persona to keep her congressional seat. Once again, Jackie coaxes Remy into rustling up some info for her regarding a potential plot that could help her campaign. He does it, but is clearly sleazed out by his own behavior afterwards. He pumps the brakes on Jackie — yet again — and the pair share an icy, over-the-phone goodbye.

So is this really, actually the end? Or will they collapse back into one another's arms the next time they're in the same office and can smell each other? Similar to the power in politics, their relationship is one that is always changing.