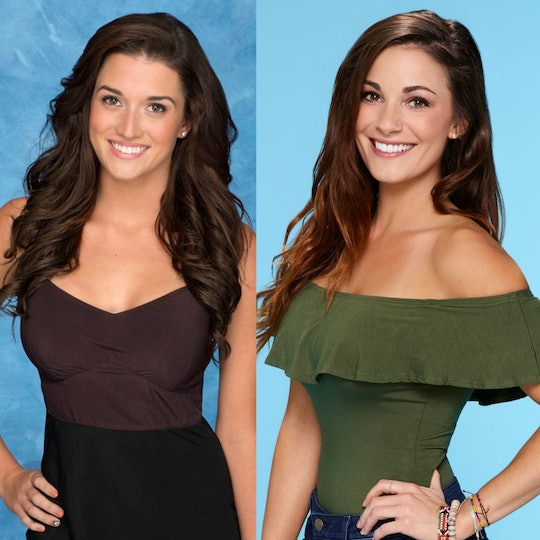 At some point, it feels like everyone who has ever appeared on any show within the Bachelor franchise must know everyone else. While perusing the Instagram accounts of various Bachelor Nation alums, you're likely to recognize plenty of faces, despite whether the reality stars even appeared on-screen together in the same season. Now, on The Bachelor Season 21, there's a whole new type of connection thanks to that intermingling – one contestant, Liz Sandoz, hooked up with Bachelor Nick Viall at former Bachelor in Paradise stars Jade Roper and Tanner Tolbert's wedding. But are Jade and Liz still friends?

Jade was one of the few people appearing on any of the Bachelor series to make a lasting romantic connection. The alum of Chris Soules' Bachelor season fell in love with Bachelorette Season 11 contestant Tanner Tolbert on Season 2 of Bachelor in Paradise. The two married on Jan. 24 in a ceremony fittingly attended by all of their Bachelor Nation friends (and officiated by host Chris Harrison, no less). As Liz explained on the premiere of this season of The Bachelor, she was Jade's maid of honor and Nick was a guest at the wedding, allowing for the serendipitous pre-show hook-up to occur.

It's obvious from Jade's and Liz's social media alone that the two have remained very close friends. Jade's Instagram account, in particular, is filled with throwback photos to her early 2016 wedding. I can't say I blame her – anyone with wedding photos this stunning is more than welcome to share them for every single #TBT and #FBF.

Liz appeared in many of the throwback wedding photos, with Jade frequently giving thanks to her friend for supporting her on her big day. In several captions, Liz mentioned that Jade had been her best friend since kindergarten, so the two have known one another for a very long time. On Sept. 17, shortly before Liz must have departed to film for Nick's season of The Bachelor, both Liz and Jade shared the same photo of the two at Mosaic Ultra Lounge in Kansas City for a fundraiser that Jade put together for Project Future Light.

As recently as Nov. 29, Jade shared a photo of herself and Liz at the Who Wants To Be A Millionaire? studios, where she referred to Liz as her lifeline (for the game show) and her best friend. Clearly, the two haven't experienced a rift in their friendship following Liz's appearance on The Bachelor.

Not only are the two still friends, Jade is supporting her bestie via social media as she appears on the show. On the night of the season premiere, Jade tweeted several times rooting for Liz and defending her against judgments for having had sex with Nick but not contacting him again after their wedding hook-up.

Jade even insinuated that the Nick-Liz dalliance wasn't the only juicy affair to occur the night of her wedding.

Jade also hasn't been particularly pleased with how Nick has represented the aftermath of the hook-up. She told Us Weekly that Liz actually asked Jade to invite Nick to a charity event that several other Bachelor alums attended (possibly the same fundraiser for Project Future Light back in September). According to the former Bachelor in Paradise star, Nick declined attending and said that he had "some things in the works" (like The Bachelor maybe). Jade also revealed that she'd encouraged her BFF to appear on the show and counseled her about what to say to Nick.

It's great to see that, no matter how Liz's appearance on the show and her future with Nick pan out, these two friends haven't led romantic relationships come between them! Liz even penned a beautiful tribute to her friend and to Jade's relationship with Tanner on her blog, A Romanced Life. These two are definitely friendship goals.