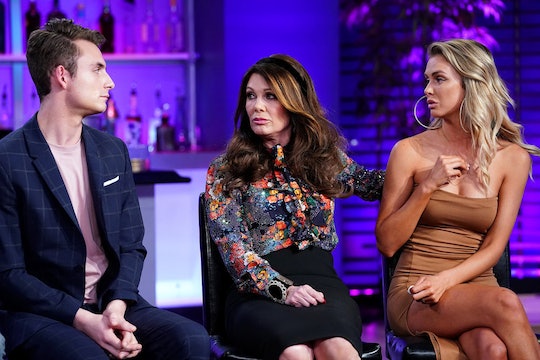 Vanderpump Rules is chock-full of broken friendships, so it's only fair some fans want to know whether James and Lala are friends after the show. As with most reality TV relationships, things are complicated.

Lala had a lot in common with James when she first appeared on Vanderpump Rules in Season 4 — they both had the black sheep thing going on, and they bonded over their mutual love of music. The two even hooked up at one point, with James going as far to rehash their sexual history to Lala's now fiancé (aka her "man," Randall Emmett) during the trio's recent trip to Coachella. Trés dramatic, no?

As any fan of the show already knows, you don't mess with Lala's "man" (side note: If I hear Lala say "my man" one more time I'm going to lose it) and she didn't appreciate James' comment at Coachella. The remark ended their friendship right then and there, with Lala revealing in confessional, according to Reality Blurb:

At this point, my friendship with James is non-existent. When Rand and I were at Coachella, James has the audacity to say, ‘Come on, we all know each other inside and out if you know what I mean,’ and I just wanted to vomit. Rand was absolutely not okay with it. And it was time for me to say, you know what, you don’t even deserve my friendship anymore.

Oh, and who could forget the infamous pasta fight? The pair's friendship has been put trough the ringer, to say the least.

Cut to Monday night's episode, and Lala is sitting down with James to lend her support after his firing from SUR. Lala wants to get to the bottom of why James acts the way he does (body-shaming, trolling, acting like a common fool, etc.), telling him in a preview clip that they're "too old" for these kind of antics.

Despite Lala's empathetic sit-down with James, it looks like the two aren't friends today.

After the show wrapped filming, Lala told Us Weekly in November that James is supposedly too toxic for her well-being, stating:

He has always been an extremely verbally abusive friend to me and I always shook it off because I knew that it was coming from a hurt place and I knew it really only happened when he was under the influence. But when you start attacking someone who I’m going to spend the rest of my life with, you might as well be attacking my mother as well.

As for James? He took Lala to task on Twitter, writing in January, according to In Touch Weekly:

And Jax?! He is just a sad man after his daddy died. Coming for me because I’m the only man he don’t like — brother, make peace with your dead father please so you can be set free. That goes for LaLa also.

Ouch. Considering Lala's pain after her dad's death is no secret, James really went below the belt here.

Call me a pessimist, but I don't think there's any hope for James and Lala's fractured relationship going forward. There's only so much one friendship can take.