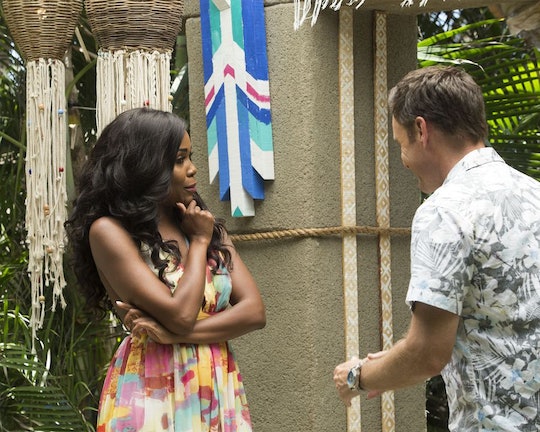 Although Season 4 of Bachelor in Paradise is mired in controversy, the show premiered with a relatively normal episode depicting the events of the first week in paradise. Viewers will still see the fallout from an incident involving DeMario Jackson and Corinne Olympios, which resulted in production getting shut down temporarily. But first, fans had a chance to see some fledgling relationships form. They had a seemingly successful one-on-one date before production came to a halt, but are Jasmine and Matt dating after Bachelor in Paradise? The production stills released so far might offer a hint at what's to come for these two potential lovebirds.

There isn't a single photo of Jasmine and Matt up from the season yet, even though they had a featured one-on-one date. Matt asked Jasmine to "be his queen," as prompted by his date card, before realizing that the pun referred to a drag bar date. Of course, Matt got pulled on stage, and Jasmine seemed super impressed with what a good sport he was about getting a drag makeover on national television. She emphasized over and over again that "not a lot of guys would do that," and she's right. He even got lessons for how to walk in heels and spent their entire dinner afterwards with the remnants of glitter shadow all over his face. (Apparently no one bothered to give him lessons in makeup remover wipes, but that's neither here nor there.)

But from the looks of their social media profiles and the photos featured by production, you would think their date was a bust. Although Jasmine's Instagram is crammed with Paradise photos, they're mostly of her with her girls. And Matt's only Instagram photo with a fellow BiP lady is of Danielle M., to whom he refers as a "beautiful blonde" in the caption. Production stills don't show any photos of Jasmine and Matt together, but there are several photos of Matt and Taylor snuggled up with each other, holding hands, etc. (Looks like Derek may have had some trouble holding onto her, even after he proved himself to be a competent fire-builder.)

Jasmine is pictured once with Ben Z. and once with Diggy, although she doesn't look particularly smitten with either of them. If I were a betting woman, I'd wager that Jasmine probably gives Matt her rose this week and things fall apart between them soon after. But given the production shutdown teased at the end of the premiere, who knows whether the Week 1 rose ceremony even happens?