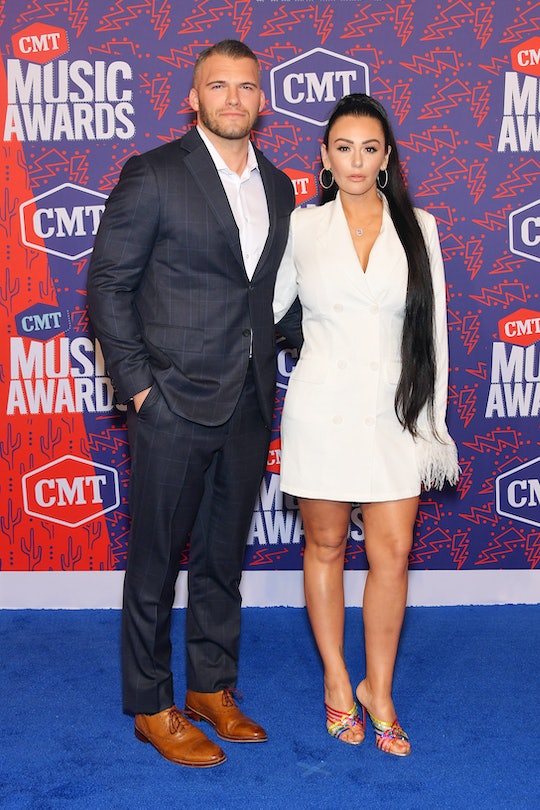 Season 3 of Jersey Shore: Family Vacation is in full swing, and fans are getting to learn more about Jenni “Jwoww” Farley’s divorce with Roger Matthews. On the latest episode, the 34-year-old reality star revealed she’s dating a new, much younger man, and she looks happier than ever. But the show was taped earlier this year, and fans are wondering if Jenni and her boyfriend are still together.

If you tune to Jenni’s Youtube channel, you’ll see that the couple is still going pretty strong. In a video from Aug. 31, Jenni and her new beau, Zack Clayton Carpinello play “The Boyfriend Tag,” confirming their current relationship status. “Since a lot of my fans out there are really nosy and want to know so much about what’s going on in my life, I decided to introduce everyone to my boyfriend Zack,” Jenni says in the video.

She goes on to ask Zack specific questions about herself, including what her weirdest habits are and how she takes her coffee. For the most part, it seems like Zack knows her very well, and the two seem to have a pretty strong relationship. When the question of who is most likely to win an argument comes up, Jenni and Zack reveal that they don’t really argue, because Zack likes to work things out rather than fight. “He likes to talk things out and find a happy medium,” Jenni explains. “So there is no winning or losing. There’s actually no arguing because he won’t talk to me if we’re going to argue or get loud. He wants to have a conversation.”

Zack and Jenni kept their relationship a secret at first, which makes sense considering Jenni was still in the middle of her divorce. But now the couple is very open about it, and they’ve attended plenty of high-profile events together in the last few months. Just recently, they attended the 2019 MTV Video Music Awards arm-in-arm, and Zack publicly gushed over Jenni. "She is my queen,” he told ET in a red-carpet interview. "I love everything about this woman. This is the strongest woman I know, in every way."

Zack comes across as a positive force in Jenni’s life, which is great, considering how difficult her last year has been. Her 8-year relationship with Roger ended in divorce, and the two are now sharing custody of their kids, 4-year-old Meilani and 3-year-old Greyson. On the Season 3 premiere of Jersey Shore: Family Vacation, Jenni revealed she never didn’t want to publicize her divorce drama for the sake of her kids, but had no choice when Roger took to social media to air his grievances.

However, since then, Roger and Jenni have come to a good place, and the two exes remain cordial and supportive as co-parents. In a recent interview with US Weekly, Roger confirmed the finalization of their divorce, and wished Jenni nothing but happiness in her new life with Zack. “She seems to have met a terrific guy and I have all good thoughts and hopes for them,” he said.

No matter who she’s with, I know fans are just rooting for Jenni to be happy. So far, it seems like Zack is bringing plenty of smiles and love into her life, and hopefully, viewers will see more of their love story as this season progresses.