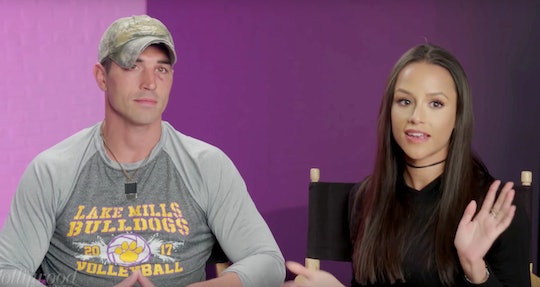 It's been a big week for baby news. Though anticipation for a new little one to be joining any family is always a huge deal, there's something super sweet about watching our favorite reality TV stars, musicians, artists and — ahem — royals have kids. With so many pregnant celebs and public figures expecting, it can be hard to keep track of all the details. That's why some may be wondering: Are Jessica and Cody from Big Brother having a boy or a girl? Good news: The couple made a special announcement right after they tied the knot.

Jessica Graf announced that she was having a baby girl on Instagram on Monday, as Us Weekly reported. Graf first uploaded a story of the couple and their friends and family popping a big black balloon to reveal pink confetti. Later, she posted a photo of them cutting a cake with the pronouncement: "IT'S A GIRL!"

Just a day prior to the announcement, Graf and her now husband Cody Nickson tied the knot in a private ceremony in L.A., as E! News reported. Graf told the network that she decided to keep the sex of the baby a secret until after the nuptials "so that all our family and friends can celebrate with us."

Back in September, People first reported Graf's pregnancy news, sharing that the couple had actually known since late summer. “We actually found out while watching the finale of The Bachelorette. I wasn’t feeling well at all and decided to take a test even though I was pretty sure I wasn’t pregnant! I didn’t tell Cody I was taking a test,” Graf told People in an interview.

She continued in the same interview, “I just went and laid back in bed with him, pregnancy test in my hoodie pocket. The show distracted me so I had forgotten it was in there until after it ended. I pulled the stick out and immediately gasped at the result!”

Later, Nickson also announced the pregnancy on his own Instagram feed, sharing a photo of Graf, and adding the following:

Every day, Jessica and I thank the Lord for all the blessings He gives us. And now we are blessed with the greatest gift... a child. We are beyond pleased. Thank you for all who have stood with us in support... and thank you to those who have opposed us to make all the victories worth it. I’m looking forward to Jessica being my wife and the matriarch of the Nickson establishment in Texas. What an incredible year.

On Oct. 14 — their wedding day — the couple opened up to People about how excited they are to be starting a new chapter in their lives. “Our wildest dreams came true today — we’re married!” they said in a joint statement. “...We found our forever in each other and can’t wait to begin this new chapter of our lives.”

All in all, it's a double-header of super exciting, amazing news for the couple. Only a few more months until the world gets to meet their newest addition.