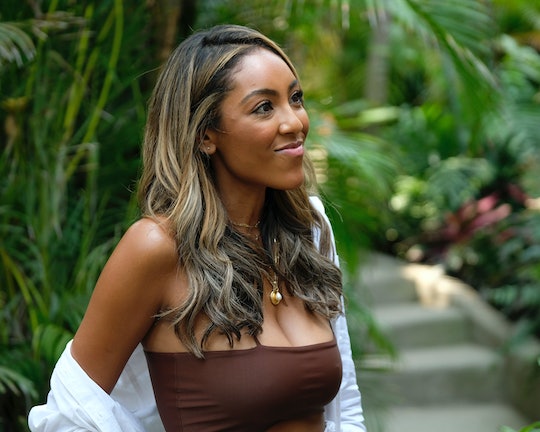 John Paul Jones & Tayshia Are The Biggest Surprise In 'Paradise'

Before the sixth season of Bachelor in Paradise premiered, fans had high hopes for one John Paul Jones and Demi Burnett. After all, they were the ideal goofy fling, sure to provide comedic relief amidst high drama elsewhere on the resort. But it turns out that both of these fan favorites came to Paradise with unexpectedly serious intentions. While Demi is deftly navigating her sexuality on the show, JPJ has actually let his vulnerable side show, sweeping Tayshia off her feet in a series of impressively romantic gestures. The question of whether John Paul Jones and Tayshia are still together is very much on Bachelor Nation's collective mind.

On Aug. 14, Tayshia posted a photo of herself on a boat that looked very much like the one John Paul Jones owns on Instagram. Eagle-eyed Bachelor fans quickly spotted it and just a day later, Tayshia deleted the post. Though extremely speculative, this is the strongest evidence currently suggesting JPJ and Tayshia have managed to fan their flame outside Paradise. Meanwhile, on the show, a sneak peek at the Aug. 19 episode shows JPJ taking things to the next level after his romantic Romeo and Juliet surprise — and Tayshia seems to genuinely be falling for him.

Once Tayshia had disentangled herself from Blake's love decagon, JPJ began moving in at a very gentle snail's pace. It was a smart move, since Tayshia spent a few days processing the drama which included but was not limited to: her going on a date with Blake, followed by Blake moving on to one of her closest friends from Colton's season, only to find out that Hannah and Blake had actually met up before BiP began filming to discuss possibly dating on the show. Needless to say, Tayshia seemed like she could use a minute and JPJ cunningly gave it to her. But by the second cocktail party, he decided to make his intentions known.

Ahead of the rose ceremony, JPJ memorized a monologue from Romeo and Juliet and recited it to Tayshia, who was sweetly impressed by the gesture. (She also endured a little ribbing from the other women for assuming the cougar role yet again, but she owned it.) Tayshia was surprised by how intellectual John Paul Jones turned out to be, in spite of his self-described heavy "stoner-surfer" vibes.

This week, according to a sneak peek posted to the official BiP Twitter account, JPJ admits that he feels "like a nervous schoolboy," "completely incapacitated," and "foolish even going after her." But he also calls Tayshia "the most incredible woman [he's] ever met in [his] life." And she seems to be encouraging it, going in for a kiss and admitting in confessional interviews that there's a lot more to JPJ than meets the eye. Although what meets the eye is, as she puts it, "a really hot version of Heath Ledger," which is nothing to sneeze at either. My prediction for season's end is that JPJ and Tayshia won't necessarily walk away engaged, but they will have a cute time in the fantasy suite and leave with each other's final roses.

You can tune in to see what happens when Bachelor in Paradise airs Monday and Tuesday nights at 8 p.m. on ABC.