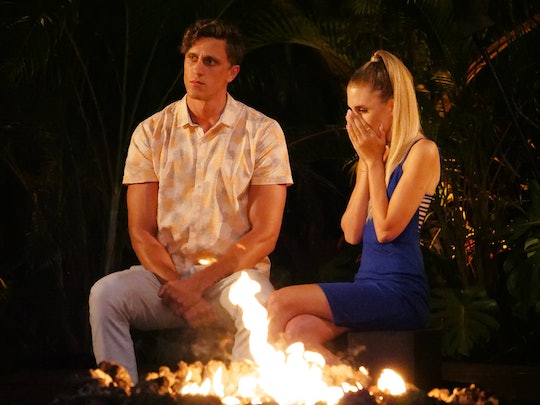 On USA network's Temptation Island, four couples tested their relationships by going on dates with other potential love interests. The couple with the longest history, Kaci and Evan, seemed to be the strongest at first, but when Evan started up a romance with Morgan, the fate of their relationship was left up in the air. So are Kaci and Evan together after Temptation Island?

As of now, there’s no official word on their relationship status, so viewers will have to catch the season finale to get more details. While Kaci and Evan have posted pictures of their Temptation Island dates on Instagram, they haven’t shared any loving pictures of each other. This could mean that they are broken up, but it could also be that they are staying off each other’s social media to add to the show’s mystery. Either way, it’s safe to say that Evan is either with Kaci or Morgan at the moment, and fans won’t know the truth until after the finale airs.

At the beginning of the season, Kaci and Evan seemed like they had a solid base they could come back to, despite any temptations. The 28-year-olds are childhood friends who have been dating off and on for 10 years. Kaci’s religious family felt that she was “living in sin” with Evan, which was one of the reasons she was pushing him to get married. Evan said that he wasn’t ready for marriage, but he loved Kaci, and was scared of losing her.

Coming in to Temptation Island, Kaci was hopeful that their new experiences would push their relationship in one direction or another. “We’ve been in each other’s lives for almost a decade,” Kaci said in the first episode. “It’s time. Either we get married, or I need to find someone that wants to be with me.”

But I don't think Kaci was expected things to turn out the way they did. After Evan and Morgan met, it was clear that they had major feelings for each other, which they quickly turned into a full -fledged romance. "What I feel with Morgan is real," Evan said on the show. "And it is so wild to be in this position. I did not think I was going to be here." Morgan was just as enthusiastic about her feelings for Evan, and went so far as to call him her boyfriend. "It definitely feels like Evan is my boyfriend," Morgan said during an episode. "Everything's, like, great right now. I can't even think of another word but great."

Evan and Morgan have been following each other on social media and have liked each other’s posts, but it’s unclear if this is because they are romantically involved or just friends. Kaci has been mum about the whole situation, and when recently asked on her Instagram stories Q & A session if she was single, she laughed it off by writing "Ha! Think I would give it away that easy?" She’s posted pictures with her fellow Temptation Island cast members along with promos for the show, but she hasn’t dropped a single clue on whether she’s still with Evan or not.

So, without watching the finale, it’s hard to speculate if Kaci and Evan are together after the show, but I’m sure they’ll be more open about their relationship status once the finale airs.