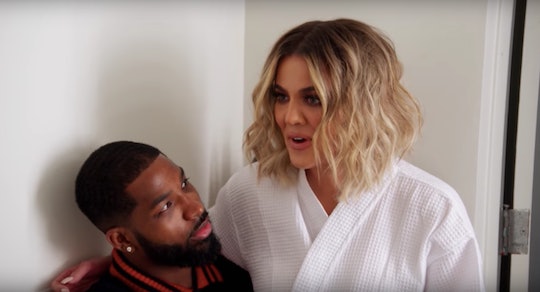 Listen up, dolls, because there's something mysterious going on with a certain Kardashian sister and her ring finger. And surprisingly enough, it's not Kylie Jenner this time. Nope, not today. In fact, fans have spotted a sparkly ring on the one and only Koko's finger, leading many to wonder if Khloe Kardashian and Tristan Thompson are engaged right now.

After reportedly moving back home to Los Angeles following the birth of her first child, daughter True, Kardashian went on a date night with her boyfriend, Tristan Thompson. Despite footage that emerged from the Daily Mail and TMZ purporting to show Thompson allegedly with other women while Kardashian was still pregnant, it's clear that the two are still very much together. (Thompson and Kardashian's reps did not immediately respond to Romper's request for comment regarding the cheating allegations.)

But now, photos of Kardashian out with Thompson have people talking, and it's all thanks to a mere accessory. While Thompson and Kardashian were at BOA Steakhouse in L.A. on Sunday night, paparazzi photos of them sitting together seemingly show a very big ring on Kardashian's left ring finger, according to TMZ. Of course that doesn't necessarily mean a proposal took place, but who really knows, right?

In addition to the photos from the restaurant, Kardashian also shared some videos of herself to Snapchat, and they also featured the ring in question.

Of course, unless Kardashian comes right out and either says they are or aren't engaged, this is all just chatter online. But odds are, it's just a piece of jewelry.

Nevertheless, fans have been freaking out about the possibility of an engagement between the two, and have taken to Twitter to express their surprise, and of course, give their own two sense.

It's important to remember that the 33-year-old new mom is smart and she knows that everywhere she goes, she's photographed. So she likely would want to keep an actual engagement on the down low unless she wanted to be constantly badgered about it. What's more, the Good American founder has put a ring on that finger before and it's very possibly the same ring she was wearing this past weekend.

In her official pregnancy announcement post on Instagram, Kardashian wore two bands on her left ring finger. But, even back then, it wasn't an engagement that the rings were marking. Then, they were simply a fashionable accessory. Now, it seems like it might be the same case. And considering the fact that the couple has been battling a lot of rumors lately, it would be pretty shocking for them to get engaged all of a sudden and have no one notice.

But, even if they aren't engaged, that doesn't mean that Kardashian and Thompson aren't together. After all, they were spotted having dinner together, and Kardashian has even publicly defended her decision to stay with Thompson. After one fan tweeted at Kardashian about her relationship, she quickly responded and defended herself.

"I love, adore & root for @khloekardashian but I'm so disappointed she stayed with that wasteman Tristan," Twitter user @ChicBitchxo wrote. "She preaches about women knowing their self worth and when to walk away but when it’s time to walk the walk, she's a hypocrite."

Kardashian, for her part, was totally honest and vulnerable in her reply. "Not exactly Queen Persia," she wrote, directly addressing the user. Kardashian continued, "you have no knowledge of what goes on in our household or the enormous rebuilding this takes to even coexist. I'm proud of my strength. I appreciate your opinion and I hope you hold that same opinion to everyone else who has stayed in situations."

Of course, Kardashian's relationship with Thompson is solely her business and if she chooses to share any milestones with her fans, it'll happen on her timelines as it always has. But, in the meantime, it should be noted that her ring is poppin'.