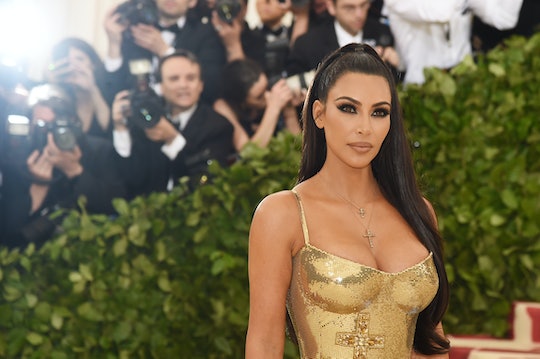 On Monday, May 6, co-chairs Lady Gaga, Harry Styles, and Katy Perry will host the 2019 Met Gala. The annual affair celebrating fashion is a star-studded event, with many high-profile vying for an invitation. But with the amount of A-list celebrity kids taking over Hollywood you might be wondering: are kids allowed to attend the Met Gala? Sadly, children aren't on the guest list, which means influential kids like North West will have to enjoy the evening via their parents' pictures. But considering this event is designed for adults, they probably weren't expecting an invite anyways. C'est la vie.

To be honest, I'm still trying to wrap my head around the idea of the Met Gala. Is it a runway show? A social gathering for the wealthy to take pictures at? Is there a DJ?

Considering the Met Gala is an invite-only event with the rich and powerful making the cut, I'm sure I'll never get the full picture. But what I do know is why the whole thing started in the first place — to raise money to benefit The Metropolitan Museum of Art's Costume Institute, and to celebrate the launch of its spring exhibition, according to CNN.

Although the event was more low-key in the first few years after its inaugural launch, it shifted its focus towards celebrities when Vogue editor-in-chief Anna Wintour took over in 1999.

"Ms. Wintour has used an intimate understanding of fashion, and of her own role in that universe, to transform a dowager social event into a frenzied red-carpet romp that now surpasses, at least in terms of frocks, the Oscars," writer Cathy Horyn explained in a piece for The New York Times.

A "frenzied red-carpet event" is probably not the best environment for a young child, so it's not too shocking that kids are personae non gratae at the event. In fact, the gala issued a new age restriction in May 2018, with an organizer telling The Hollywood Reporter that "it's not an appropriate event for people under 18."

It's also important to note that Wintour gets the final say over who gets to go.

"Ms. Wintour has final say over every invitation and attendee, which means that even if a company buys a table, it cannot choose everyone who sits at its table: It must clear the guest with her and Vogue and pray for approval," Vanessa Freidman wrote for The New York Times.

Maybe it's just me, but I have a feeling Wintour wouldn't approve the attendance of a 5-year-old to a late-night and glamorous party. And what parent is itching to take their toddler to a black tie affair? This is a night for the grownups to have fun.

Of course, there's no harm in letting the kids admire the party from afar. And who says a child can't help pick out their parent's outfit for the evening? Kardashian's "Northie", for instance, loves to help her mom get ready for red carpet events.

The bottom line here? Although kids aren't allowed to the Met Gala because it's an adults-only event, they can still celebrate from afar. Happy galaing.