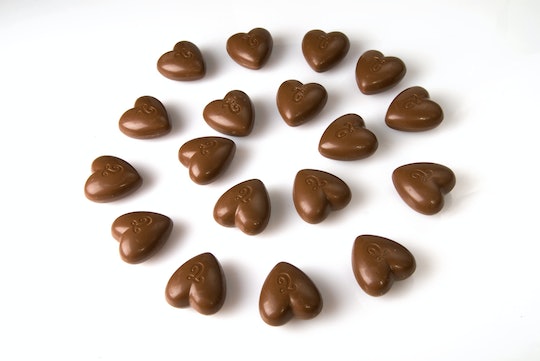 Can My Kid Bring Candy To School For V-Day?

It used to be that classroom celebrations were, more often than not, sugary sweet, frosted affairs. But in more recent years, as childhood obesity has risen and more attention has been paid to food allergies, in-school parties and holiday celebrations have been nearly (or entirely) food and treat-free. With rules and regulations varying school to school or even classroom to classroom, parents are left wondering are kids allowed to take candy to school on Valentine's Day?

Candy bans have become more and more common in schools across the country for a whole host of reasons, including nutritional concerns, food allergies, and classroom distractions, among other things. In Minneapolis, as well as New Jersey, Pennsylvania, and Connecticut, some schools banned the celebration of major holidays — including Valentine's Day — altogether due to increased diversity and the desire for inclusivity, according to the Minneapolis Star Tribune. Parents fall on both sides of the debate — pro-candy or pro-ban.

For some parents, an all-out candy ban goes too far. Although wellness policies and nutrition education are important, when a school in Connecticut prohibited candy for Valentine's Day celebrations in 2014, one mom told FoxNews' Tom Starnes that she didn't see anything wrong with candy one day a year. And when a school system in the Richmond, Va-area banned candy in 2015, one mom told the local NBC affiliate that Valentine's Day is all about candy. Kids tend to love candy and the promise of (or potential of) receiving candy can perk up an otherwise boring or stressful day, for sure. In high school, an Advanced Placement teacher used to hand out allergen-free candy to her students when she deemed her overachievers too stressed. If every kid in the class brings candy or other sugary treats to go along with Valentine's Day cards, however, that candy stash can really pile up.

Other parents cheer candy bans and wish the mountainous piles of candy that signal classroom holiday celebrations would disappear. That Richmond-area district that banned Valentine's Day candy several years ago? An area suburban girl died as a result of eating a peanut in 2012, according to the local NBC affiliate. So for kids with allergies, classroom snacks or treats can be quite dangerous. Parents who are especially mindful of what their little ones eat each day sometimes view school-day treats as "unnecessary," according to CafeMom. Valentine's Day celebrations can be especially sugar-filled, from a special pancake breakfast, to a chocolatey treat from Mom and Dad, to an after school celebration with family members, friends, or extracurricular teams and activity groups. Cutting back on candy with cards, can help curb at least some of the crazy amounts of sugar that kiddos ingest each Valentine's Day.

So if your child's school bans candy, or you just don't want to contribute to the influx of sugar that day, how can your kid still celebrate? First of all, if you're going to send Valentines (or if the class is celebrating that way), make sure every child will receive one. According to Denver-based magazine 5280, kids notice if they don't receive as many Valentines as their friends, and they don't necessarily easily forget it either. If your child still wants to bring something for his or her pals that isn't loaded with sugar, pencils, stickers, crayons, and other small items are good Valentine's Day alternatives.

Regardless of the rules at your child's school or your personal feelings on the matter, Valentine's Day can still be a fun, celebratory day. With or without candy.