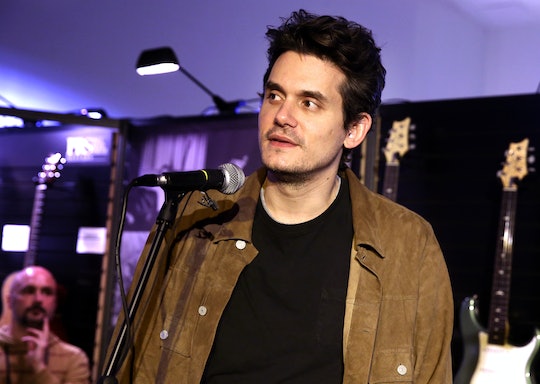 Celebrity romance rumors are a dime a dozen. And most famous folks ignore the chatter, but not when they're friends with Andy Cohen, who's known for pressing people for the hot gossip. The Watch What Happens Live With Andy Cohen star recently confronted a longtime friend for the answer to a question that's been on just about everyone's mind as of late: Are Kourtney Kardashian and John Mayer dating? The "I Guess I Just Feel Like" singer came ready and willing to set the record straight.

During Monday's episode of SirusXM's Radio Andy, Mayer was asked about rumors he "came after" Kardashian during a party. The musician said those rumors are absolutely "not true," though he said he didn't have any bad feelings toward the Kardashians — in fact, he's a fan. At least of them as people. Mayer called the whole family "nice people," adding that he didn't have any "philosophical objection" to them. He went on to recall the party in question, revealing that it was a GQ party he showed up rather late to.

"I ran into Kourtney at a party that I kind of crashed, it was a GQ party that I crashed it towards the end," Mayer shared during Radio Andy, admitting that he was somewhat suspicious of the origins of the dating rumors. "I got to be honest with you, little suspicious about the origin of the story. I'm not sure the calls are not coming from inside the house on this one."

Mayer went on to tell Cohen that if it was the Kardashians who started the rumor, it was "diabolical and genius." Mayer said during the SirusXM interview that rumors and gossip have a way of setting the wheels in motion for something more.

"When people start gossiping about you and someone else, and they start putting your picture together, it gets real suggestive. You're like, 'Well, if I do then everything kind of falls into place because everyone is already putting us together.' So it's a genius idea," Mayer said, before adding that he's "post-celebrity relationship" at this stage in his life.

Kardashian is hardly the only celebrity woman Mayer's been linked to recently. In 2018, for instance, speculation was rife about the singer and Halsey being a couple, which the outspoken "Without Me" singer was quick to shut down, according to E! News. Speculation began after the pair exchanged a few seemingly-flirty messages on social media for all to see. Halsey was quick to shut down speculation, however, tweeting about it for her followers to take note of. "I just had a ground-breaking idea. What if....we let female artists...have friends...without assuming that they are sleeping together?" she wrote. "I know I know. It's like, completely ambitious but like, imagine if we like, tried?"

Mayer has enjoyed several high-profile romances throughout his career. He famously dated Vanessa Carlton, Jessica Simpson, Jennifer Aniston, Taylor Swift and many others, according to the Evening Standard. As such, he's no stranger to rumors and gossip.

It looks like where there's smoke, there isn't always fire. Mayer appears to be very much single, despite all the rumors swirling about him and Kardashian. Unless, of course, he's keeping his latest love interest under wraps... As for Kardashian, she looks to be enjoying the single life as well. Still, the rumors were fun while they lasted, right?