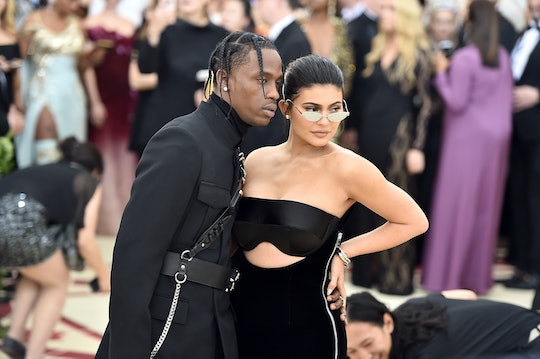 Sometimes, the world seems to operate on rumors, and celebrities are no exception. Any tiny little thing can spark a whole new chain of rumors and fan theories that go on for months and it seems that Kylie Jenner is the latest target. After a recent trip to the jewelry store, according to E! News, fans are wondering if Kylie Jenner and Travis Scott are getting engaged. But, frankly, the rumors are getting to be a bit out of hand.

The couple were reportedly spotted while heading into Polacheck's Jewelers, a luxury jewelry shop in Calabasas, California, according to Entertainment Tonight. This came not too long after Jenner's 21st birthday bash, where Jenner went all out for the celebration. Her boyfriend Scott was, of course, in attendance.

The two currently have one child together: Stormi Webster, who was born on Feb. 1, 2018. Famously, Jenner kept very quiet about her pregnancy. The couple didn't announce anything until a few days after Stormi's birth with Jenner taking to Instagram to apologize for keeping fans in the dark, while still noting, "I knew for myself i needed to prepare for this role of a lifetime in the most positive, stress free, and healthy way i knew how."

Maybe fans don't want to miss out on another big moment in Jenner's life, but the rumors are still getting to be a little extra.

This isn't the first time people have speculated about Jenner's engagement status. In April 2018, Harper's Bazaar reported on rumors surrounding Jenner wearing a huge diamond ring. And, all the way back in November 2017, People reported on similar rumors.

It seems that, this time, the rumors are partially fueled by Scott's birthday celebration post. After posting an Instagram picture of Scott and Jenner, Scott captioned the image, "Happy bday wifey I love u mommy u my heart rib toes and all. May GOD continue to bless u and ur spirit. This mark in ur life is the start to more greatness."

To anyone who reads literally, sure, that might be a reason to suspect the couple headed into a jewelry store for an engagement ring. But, really, wifey is nothing more than an affectionate nickname; it doesn't actually say if a couple is currently married or engaged.

Even if some fans know better than to buy into rumors, they're definitely still hoping for the couple to get engaged soon. Back in July 2018, one fan tweeted at Jenner, "are we ever going to see a kylie X travis wedding?????????"

Recently, another fan tweeted at Jenner saying, "if you and Travis Scott get married can I come to the wedding please?"

An insider source reportedly told E! News that the couple left after "buying a few things". Although, none of those unspecified items included an engagement ring. Another source reportedly told the outlet, "Kylie and Travis have definitely discussed getting married and she has expressed what type of ring she would want Travis to buy her... They are not engaged right now but have talked about it, and it's only a matter of time."

So, essentially, the rumors aren't entirely baseless — yes, the couple does plan on getting married, according to "sources." But it's probably fair to assume that Scott won't bring Jenner to the store with him when he goes to buy the ring.

Fans, though, shouldn't get their hopes up about being the first to know. Given that Jenner and Scott chose to hide their pregnancy with baby Stormi, it's possible they'll follow in the steps of celebrities like Cardi B and Offset by not going public with this part of their relationship.

But in the meantime, it's probably best to lay off the rumors for a little bit or wait for them to reveal any exciting news when they feel the time is right.