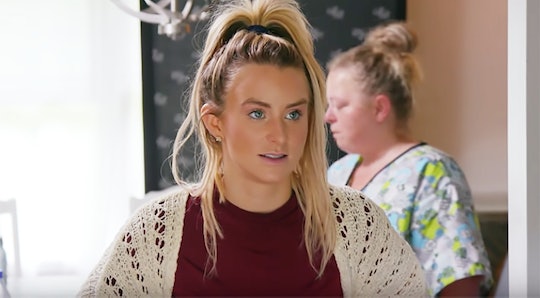 At the start of Teen Mom 2 Season 9, Leah introduced her new boyfriend, a medical salesman named Jason. Now that the season is in its final few episodes, some people are wondering if Jason and Leah are still together. As it turns out, some things just aren't mean to be.

Leah and Jason started dating in spring 2018, but broke up for a spell in fall 2018. They eventually got back together in December 2018, and multiple sources close to the couple gushed about their compatibility to various news outlets.

“They share the same faith and have gone to church together,” a source told Us Weekly. “They love hiking, cooking, and are both very family oriented. He’s very attentive.”

Things were going so well between the pair that Jason decided to make an appearance on Season 9 of TM2. Fans got to witness how he interacted with Leah's exes, Corey and Jeremy, and viewers also saw how well the two faced challenges together.

"I'm glad you're here ... I really appreciate it," Leah said in praise of Jason's help when her house flooded.

Although the two had a lot going for them, they broke up in March. Leah alluded to the split on her Instagram Stories, retweeting this message, according to Us Weekly: "When someone shows you who they are believe them. Facts.”

It looks like Leah has since-deleted her Instagram photos featuring Jason, which seems to suggests she's really done with the relationship.

Leah didn't explain why the two broke up, but she did provide some insight into their relationship following their first breakup.

“I’m not saying Jason’s not the right person," she told Hollywood Life. “I’m not saying that anyone — I don’t know.” She also gave some more insight inside their breakup saying, “He wasn’t in a great place in his life, and it is what it is, It’s fine.”

Now that Leah is single, some people are curious if she'll get back together with Addie's dad, Jeremy. The speculation is fair given that Leah has been hanging out with her ex non-stop lately.

Oh, and did I mention an interesting tweet Leah recently liked? "@TM2LeahDawn & @jcalvert505 should get back together," the curious tweet reads. "They look sooo cute." Hmm.

As for Jason's take on this split? In February, he admitted that their relationship isn't a "simple love story."

“Just to clarify because I usually don’t respond to anything, but with her three, my child, TV, tabloids, rumors, her travel and work, my work, friends and family, and exes, it’s not a simple love story," he wrote to a fan on Instagram, according to In Touch Weekly. "People have baggage and sometimes behaviors have to change on both sides and it takes lots of work and patience and time to make the ‘love story’ happen. I hope that makes sense.”

He added: “ ... It’s definitely not easy but we both do the best we can for each other and our families to let OUR LOVE rule and ONLY consider our situation and what works best for us may not always be popular to some, but it makes our family strong and make it work."

Well, maybe the couple's relationship became too difficult to maintain in the long run. As Jason mentioned, successful relationships often require "lots of work and patience." Here's to wishing the exes the best going forward.