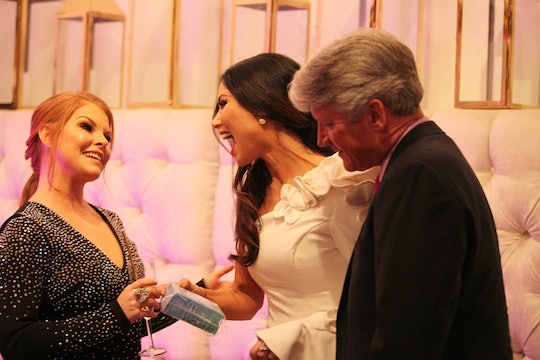 LeeAnne & Brandi May Not Be Getting Along On 'RHOD'

LeeAnne Locken and Brandi Redmond were decidedly at odds in the first season of The Real Housewives of Dallas. They clashed so intensely that it was a shock when Season 2 rolled around and they had inexplicably become besties off screen. However, that friendship was tested over the course of the season and they might not be as close in Season 3. So are LeeAnne Locken and Brandi Redmond friends?

RHOD Season 3 debuts on August 15, and the trailer certainly makes it seem like trouble is brewing between Brandi and LeeAnne. They have a few fights in the two-minute trailer: in one, Brandi demands to know why LeeAnne hasn't set a date for her wedding, which LeeAnne feels is none of her business. In another, Brandi points out that she's trying to adopt a baby, so she didn't appreciate LeeAnne calling her an alcoholic. In yet a third, they get into an argument at some kind of costume party (Brandi is dressed as a cheerleader, fittingly) and LeeAnne pokes Brandi hard in the chest. On top of that, while LeeAnne is leading Kameron and D'Andra in a meditation, Brandi remarks, "[LeeAnne] can bang on a bowl all she wants, but she's toxic."

Going purely off the Season 3 trailer, it seems like Brandi and LeeAnne are on the outs once again.

Social media isn't any more illuminating about Brandi and LeeAnne's relationship after filming. They don't feature much in each other's Instagram posts, other than promotions for the show, but there doesn't appear to be any outright venom either. Brandi posted a picture from a photoshoot with LeeAnne, Stephanie, and D'Andra, captioning it, "BTS...today with these beauties," which certainly seems to be on the friendly side. They might not be the best of friends, but it's possible they're cordial, at the very least.

But that doesn't mean it'll be smooth sailing on the show. In an interview with Entertainment Tonight, LeeAnne talks about her ongoing journey with therapy, as well as her penchant for creating drama. The article states that LeeAnne "hints that one co-star in particular, likely Brandi Redmond, still likes to pushes buttons," though she never mentions Brandi by name. But LeeAnne does make it clear that there's discord among the women in Season 3:

I feel like on Dallas Housewives, there's always been the drama street, as we'll call it, the drama street is a one-way and somehow, it always ends up at my door. Sometimes this season, I open the door. Sometimes I don't. And sometimes I bust the door down and give them a little [something]. This ain't gonna get nowhere good. You know, I'm — as a soul, as a human, am not gonna change.

LeeAnne and Brandi did have a disagreement or two on Twitter previously, back in October 2017. Brandi accused LeeAnne of "trying to bring every person down unless it benefits her" and also called her judgmental. LeeAnne said that watching the show had been tough because of all the "betrayal and hurt." Brandi later said that she owed LeeAnne an apology in one of her blogs for Bravo, but it seems like there's still a lot of back and forth in their friendship.

In the Season 3 trailer, Stephanie says that she thinks LeeAnne has truly changed. Considering Stephanie and Brandi are so close, she might be able to change Brandi's mind about LeeAnne. Failing that, it looks as though LeeAnne and Brandi will still be butting heads for the foreseeable future. But who knows? They surprised viewers with their friendship once before, so they could always patch things up again.