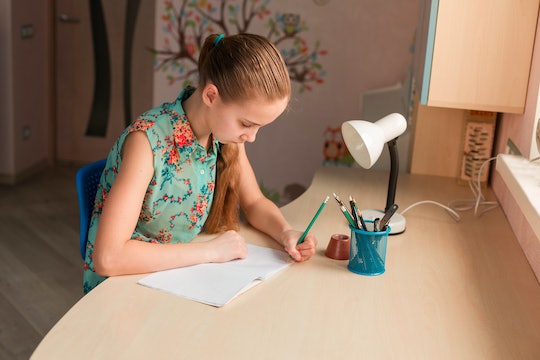 Are Left-Handed People Smarter? Lefties Have So Many Bragging Rights

Left-handed people have been the subject of interest and suspicion for centuries. But there may be a serious upside to going through life as a southpaw. So are left-handed people smarter in general than their right-handed counterparts? Writing with the "wrong" hand may signal some interesting characteristics about a person, possibly including their intelligence.

Granted, something as complicated as intelligence is difficult to measure in an accurate way, so any results are bound to be a little ambiguous. But in general, lefties seem to have an advantage in one measurable aspect of intelligence. Overall, left-handed people can apparently solve complex math problems with more ease than their right-handed counterparts, as noted in a 2017 study in Frontiers in Psychology. The study, which tested 2,300 primary and secondary school students, found left-handed kids performed better at math above the level of basic arithmetic. Does this mean all left-handed people are necessarily smarter than right-handed ones? That all depends on how much you value advanced mathematics skills. (I definitely consider anyone who can handle calculus smart.)

But it looks like left-handed people may have a hand up in more creative pursuits, as well. "Left-handers have a higher 'fluid' intelligence and better vocabulary than the majority of the population. This is perhaps why there are more of them in creative professions, such as music, art and writing," said Dr. Alan Searleman in a presentation to the American Psychological Association's annual conference, as noted in The Independence. As he further explained, left-handed people often excel at problem-solving skills, and they tend to have larger vocabularies than their peers. It looks like, on the whole, left-handed folk have a lot of positive things going for them.

Really, it's about time left-handed people finally received some good news. Although left-handed people make up about 10 percent of the population, as noted in Everyday Health, they have historically put up with some pretty rough treatment. Suspected of sinister motives and possibly even witchcraft, left-handed people had a pretty tough time in the Middle Ages, as noted in TIME Magazine. Can you imagine worrying about persecution just because of the hand you happened to prefer? Yikes.

Left-handed schoolchildren in particular faced a rough time as well. In the early twentieth century United States, for instance, left-handed children were sometimes "retrained" to use their right hand. Such retraining methods involved tying or otherwise immobilizing the left hand, or sometimes even resorting to humiliation, as noted by the Johns Hopkins University Press. These poor kids had to deal with physical restraint and bullying, all while being forced to write with their non-dominant hand. That sounds like a hostile classroom for sure.

Even in more recent years, left-handed people still have to cope with life in a right-handed world. Most tools are made for people who favor their right hand, as any lefty who has struggled with a pair of scissors can attest. And purchasing specific products for left-handed people can start to add up, at least according to a report on The Week. It looks like living in the right-handed world still comes with a huge share of annoyances and struggles. (You will probably never meet a left-handed person who enjoys writing with a ballpoint pen, for instance. It turns into smudge city. And don't even mention ring binders.)

Overall, though, handedness doesn't matter all that much when it comes to a person's intelligence or abilities. "The differences between righties and lefties are really rather subtle, and of much greater scientific interest than any kind of practical use," said Ronald Yeo, PhD, professor of psychology at the University of Texas-Austin, in HuffPost. Whether you're a righty, a lefty, or one of those super-rare ambidextrous people, you're all right.