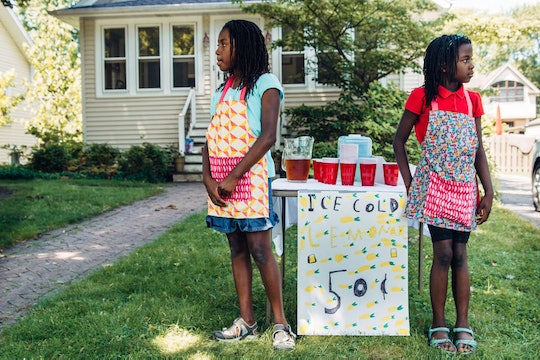 Lemonade Stands Are Legal In These 14 States Only, So Mini Entrepreneurs Beware

Many American kids get their first taste of commerce and entrepreneurship by running a lemonade stand, that classic summertime business. However, kids peddling this sweet drink to passersby might be running an illegal operation. So are lemonade stands illegal in the US? As it turns out, the law protects these little enterprises in only 14 states.

Various laws about commerce and food safety could make a lemonade stand illegal in your state. Vendor permits, restaurant licenses that comply with local health codes, and local traffic and zoning ordinances are just a few of the legal issues that may affect children's lemonade stands, as outlined in CNBC. And although it may sound a little incredulous, a few kids across the country have faced consequences for running a lemonade stand. In 2018, mother Jennifer Knowles was shocked when someone called the law on her kids' lemonade stand in Denver, Colorado. "The police officers came over and they said that because my boys and I did not have permits for a lemonade stand they shut us down and we had to stop immediately," Knowles said in The Denver Channel. Some families have even faced fines. In 2011, parents in Bethesda, Maryland were fined $500 for their kids' unlicensed lemonade stand, according to UPI. (The $500 fine was later waived, according to WUSA9.) In some cases, kids and their parents have faced negative consequences for running these classic American businesses.

So what's a kid to do? No, your tot doesn't have to start an underground operation to sell lemonade on the sly (although that would make a great movie). There are people and organizations out there working to make it easier and legal for kids to run these mini businesses.

For instance, the brand Country Time Lemonade runs Legal-Ade, which helps kids across the country pay permit fees and fines on their lemonade stands if the small business happens to run into trouble. The site provides info about contacting your local state representatives. Plus, Legal-Ade will cover the cost of a lemonade stand fine for up to $300 if your kid's stand does get into some trouble.

In addition, plenty of states are on board to legalize it (lemonade, that is). For instance, Texas laws about homemade, unregulated drinks once outlawed lemonade stands, but the "Lemonade Freedom" bill passed in 2019 now permits their operation, according to TIME. And on Monday, April 1, 2019, a bill in Colorado passed giving minors the ability to run a short-term business without obtaining a permit, according to U.S. News & World Report. In other words, kids who want to run lemonade stands in these states won't have to fear any backlash from fines or shutdowns.

If your kid wants to run a lemonade stand this summer, then consult your state's laws and regulations to learn what's allowed. With the laws about small businesses run by minors changing, you just might be lucky. For the most part, though, these are the states where lemonade stands can legally be run without a permit, according to Country Time's Legal Ade map.

Hopefully soon, kids all over the US will be able to run these summertime startups without any problems, because lemonade stands are such a lovely tradition.

More Like This
35 Children’s Books Starring Black Characters
14 Recipes For Sick Kids When Everyone's Tired Of Canned Soup & Crackers
72 Hilarious Valentine's Day Jokes For Kids
Viral Hives In Children: What Doctors Want You To Know
What Parents Are Talking About — Delivered Straight To Your Inbox