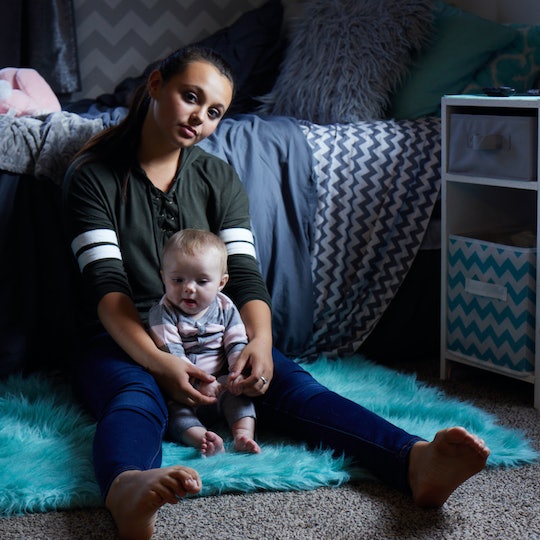 Lexus & Shayden From 'Unexpected' Have A Complicated Relationship

Every Sunday night on TLC, Unexpected explores the lives of several young moms as they navigate pregnancy and parenthood. One of the girls featured on the show is seventeen-year-old Lexus, who has a baby daughter named Scarlett. In Season 1, Lexus struggled to maintain her relationship with Scarlett's father Shayden and they eventually decided to break up. But have things changed in Season 2? Are Lexus and her boyfriend still together after Unexpected ?

It seems like Lexus and Shayden have reconciled, according to Newsweek. In an exclusive interview, Lexus told the publication that she and Shayden were "still together and happier than ever." They were planning to take some big steps together, too: they were interested in moving in together ahead of her eighteenth birthday, leaving behind their hometown so they could be "closer to a place that has more job opportunities."

Shayden added that they wanted to get married, though they weren't going to do so immediately. Instead they were going to wait until Lexus was a few years older. It looks like they intend to be together for the foreseeable future. Though their relationship issues have been well documented on Unexpected, Season 2 will depict how they begin to work things out.

Lexus and Shayden had been together in some capacity since she was only eleven and he was thirteen. Though Lexus' mom, Kelsey, disapproved of the relationship and tried to keep them from seeing each other, they continued to do so in secret until Lexus became pregnant. Throughout Season 1, viewers saw how strained things became between her and Shayden at times, and eventually they decided to call it quits. But Season 2 made it clear that Shayden's attitude and the travails of teen parenthood weren't the only contributing factors in the split.

According to Lexus, she started cheating on Shayden with a friend of hers named Lilly and chose to leave him to pursue that relationship. At first things were going well between the girls, but they had their own issues. "There was a lot of good times with Lilly and there was a lot of bad times with Lilly," Lexus said in a sneak peek made available by Newsweek. She appreciated how good Lilly was with Scarlett, and Scarlett adored Lilly in return. But Lilly was also controlling, especially when it came to Lexus continuing to speak with Shayden — whom she had to talk to so they could co-parent the child they shared. Lexus and Lilly broke up, and it seems Lexus has reunited with Shayden.

Lexus has posted plenty of photos of her little family on Instagram, and in July she had a special message just for Shayden on their anniversary. Accompanying a slideshow of them through the years, Lexus wrote that she couldn't believe they'd made it this far, especially considering their many rough patches. "You have helped open my mind up to new things, new people, & new ideas," Lexus' caption read. "You have taught me to love myself, & everything about me. You make me feel beautiful, & loved for. You make me feel safe, & calm [sic]." She continued:

I cannot explain how proud I am of you. You are an amazing a** person, & a kick a** dad baby. You have came such a long way. & you have helped me grow along the way, just as much. I thank you for everything you have done for me, & shown me in life. Our relationship has grown so much just in the last few months.. & our love will only grow stronger. You are my best friend. You are the love of my life. I can’t wait to have many more years with you & our beautiful babygirl. I love you shayden, & I will be your wife someday ;) Happy 2 years baby [sic]

Despite the ups and downs, Lexus and Shayden are trying to make it work, and they seem to be in it for the long haul.