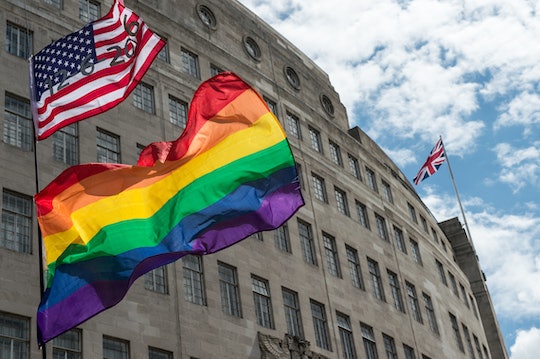 Are LGBTQ People Usually Omitted From The Census?

The United States census might seem like a terribly boring exercise in information gathering — it's literally an every-ten-years tally of the population's basic demographic information — but it actually serves a very important purpose. The data collected is used to inform decisions regarding community government representation, the distribution of public funds, and, in general, suggests how the population is changing and what their needs might be, but on Tuesday, it was revealed that a list of planned subjects for the 2020 census submitted by the Trump administration was actually changed to exclude asking about Americans' sexual orientation and gender identity. Are LGBTQ people usually omitted from the census? Unfortunately, yes — and that doesn't appear to be changing anytime soon.

According to The Washington Times, the U.S. Census Bureau seemed to be announcing that it was actually intending to ask about Americans' sexual orientation and gender identities in the next census, as both were included in an appendix listing proposed topics. According to Out, the move would have been in line with the recommendations made by various federal agencies last year, when they called on the Census Bureau to formally collect data on LGBTQ Americans, but any optimism over progress and inclusion was quickly dashed, when the agency released an updated version, and claimed that it had "inadvertently" included sexual orientation and gender identity in the list when it wasn't supposed to be.

That's an infuriating blow to be sure, and also not entirely all that surprising given the anti-LGBTQ slant of the current administration (the vice president, after all, has long been a proponent of so-called religious freedom laws, according to The Advocate, which put the LGBTQ community at risk of legal discrimination). But what is perhaps just as frustrating is the fact that, actually, LGBTQ people have essentially always been overlooked by the census.

According to TIME, the closest the census has come to gathering formal government data on the LGBTQ community is when a question asking about "unmarried partners" was added in 1990. That category would obviously include an awful lot of cohabitating straight couples, but it at least allowed for some insight into how many same-sex couples may be living together, and where they might be located throughout the country. Of course, we have plenty of better estimates and figures these days about the LGBTQ population in America, but much of those figures are based not on direct polling, but either come from, or are based upon, the work of former UCLA Williams Institute Director Gary Gates. Gates took census data along with his research to produce The Gay and Lesbian Atlas over a decade ago, and that work helped provide actual information for the first time about things like the number of LGBTQ individuals in the military, or the fact that same-sex couples live in almost every county in the United States (imagine that!).

But while Gates' contributions have helped increase visibility for LGBTQ individuals, there is still a long way to go as far as actual statistical data is concerned — and that's especially true for transgender Americans, who are even more marginalized. And as California Sen. Scott Weiner explained to TIME back in 2016, collecting data matters for reasons far beyond population stats:

For decades our struggle has been to stop being invisible. When you don’t have data about a community, at times it can seem like the community doesn’t exist.

In response to the Census Bureau's backtracking, the National LBGTQ Task Force Criminal and Economic Justice Project Director Meghan Maury, released a statement in which she called the move "yet another step to deny LGBTQ people freedom, justice and equity." That's not only because it seems to flat-out ignore that LGBTQ people exist and deserve to be counted, though. As Maury noted,

Information from these surveys helps the government to enforce federal laws like the Violence Against Women Act and the Fair Housing Act and to determine how to allocate resources like housing supports and food stamps. If the government doesn’t know how many LGBTQ people live in a community, how can it do its job to ensure we’re getting fair and adequate access to the rights, protections and services we need?

Regardless of any politician's personal viewpoint, it seems pretty clear that the value of the census is diminished greatly when it doesn't ask the kinds of questions that obviously need to be asked. And by choosing to leave sexual orientation and gender identity out of the conversation — particularly when those topics had already made the cut in the original bureau submission — the government is basically continuing to allow a significant proportion of Americans' needs to be overlooked.