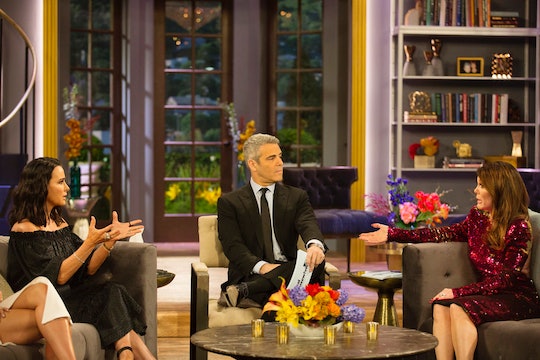 Real Housewives of Beverly Hills returns for Season 9 on Feb. 12 , but one Housewife is conspicuously absent from much of the season. Lisa Vanderpump reportedly had such a tough time this year, stemming from an apparent feud with castmate Kyle Richards, that she refused to film group scenes. So RHOBH fans may be wondering if Lisa Vanderpump and Kyle Richards are still friends after all of this. Going into Season 9, the ladies say they aren't on speaking terms.

In an interview on LIVE With Kelly and Ryan, Kyle explained that the two weren't in a good place, but she did seem hopeful that they could reconcile. "My status with Lisa right now is not good. I'm sad to say that we're not speaking at the moment," she said, per Bravo's The Daily Dish. "I really hope so [that we can speak again someday] because I care about Lisa and we've been friends for a long time and we've been doing this for a long time."

The pair are OG Beverly Hills cast members who have been on the show since its inception in 2010. "It's very difficult," Kyle added of repairing the friendship. "You can always get back. Look at Camille Grammer: we did not get along in the beginning, now we're great, so I hope so. I honestly hope so. But, right now it doesn't seem like that."

The Season 9 trailer hints at a feud between Lisa and Kyle, but doesn't actually show the source of it. Back in November, an anonymous source told Us Weekly that several of the cast members allegedly caught Lisa in a lie, and her husband Ken Todd can be seen screaming "you're a f*cking liar, Kyle" in the Season 9 trailer. Earlier this week, People revealed the Season 9 taglines and both Lisa's and Kyle's throw a fair bit of shade.

"You can stab me in the back, but whilst you’re there, kiss my *ss," Lisa says.

Meanwhile, Kyle's tagline teases: "In Beverly Hills, the truth always has a way of rising to the top."

In a February appearance on Watch What Happens Live, Kyle revealed that she was actually kicked out of the Vanderpump home this season after trying to smooth things over. "The last time I spoke with Lisa or Ken was when I was at their house and we were going to have a talk, and then it ended up being a disaster," she said, according to People. "It was really strange for me because I’m so close with them.”

As for Lisa, she hasn't commented on the feud with Kyle directly, but she did explain why she opted out of shooting group scenes this season in a November interview on The Talk. "It’s my ninth season and I had a very difficult year and after doing Vanderpump Rules and opening a new business, things got very complicated," she said. "So I’m in most of the season, but it got a bit complicated."

It looks like fans will just have to tune in to see what started the fall out. Real Housewives of Beverly Hills airs Tuesday nights on Bravo.