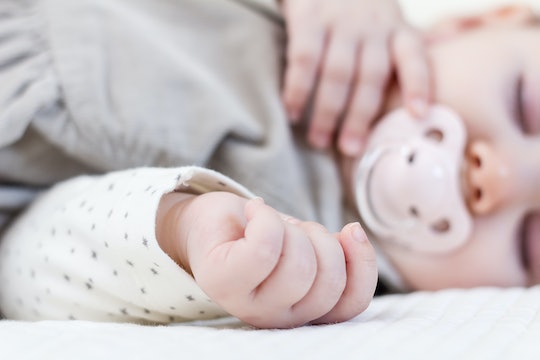 Why Your Child Can (& Can't) Sleep With A Lovey

When the little girl that I babysat for left her little embroidered lovey at her nanny's house one night, I saw firsthand how absolutely essential they can be when it comes to a peaceful night. She collapsed into hysterics, unable to understand why or how she'd have to attempt to sleep a full night without it. Babies, toddlers, preschoolers, and even somewhat older kids can get attached to transitional or comfort objects commonly known as "loveys." But, given common safe sleep guidelines for babies, you may be asking, are loveys safe bedtime?

Transitional objects, like a lovey, are intended to provide comfort and security to your little one during times that might be somewhat scary for them, such as nap and bedtime. According to the website for baby sleep expert Kim West, also known as The Sleep Lady, a lovey can help soothe your baby because it's a constant in a time of so much uncertainty and transition as they're discovering separation anxiety. When the baby's parents aren't around, their lovey can meet their need for comfort that their parents or other caregivers would typically provide. It can help your baby sleep more restfully either during the day or overnight.

According to the recommendations from the American Academy of Pediatrics (AAP) released in late 2016, in order to provide a safe sleeping environment for infants, parents and caregivers should keep all "soft objects" out of the crib because they could cause strangulation, suffocation, and raise the risk of SIDS until the baby is at least a year old. Loveys fall under that category. The Baby Sleep Site echoed the AAP's recommendations, noting that there should be no plush loveys in the crib until the baby is at least 1-year-old. In an interview with Parenting, however, pediatrician and co-author of Baby 411 Dr. Ari Brown said that once your baby turns 6 months old, you can give them a small lovey that doesn't have any potentially removable eyes or buttons that babies could rip off and choke on.

Dr. Claudia M. Gold, an infant mental health expert, took it a step further in a guest post that she wrote for Psychology Today. "When I speak with new parents, I recommend that when an infant turns 4 months, they introduce a small soft toy that does not pose any suffocation risk, that can serve as this transitional object," she said. "I recommend getting two so that one at a time can go in the wash, and in case one is lost." Gold wrote that she feels that loveys can help facilitate independent sleeping, which is one of the reasons why she is in favor of them.

Ultimately, it's important to talk to your pediatrician if you're at all unsure about if your baby is ready — both safety and development-wise — to sleep with a lovey or if you should hold off for some reason. Your baby's doctor will also be able to help you determine if the lovey you want to give your child is appropriate. A few things to keep in mind: a lovey should be about the same size as your baby's head or smaller, according to the aforementioned article from Parenting. Loveys should also be made of breathable fabric, according to Mother Magazine. If your baby has a safe favorite lovey that helps them sleep at night and they're old enough, that's really what matters.