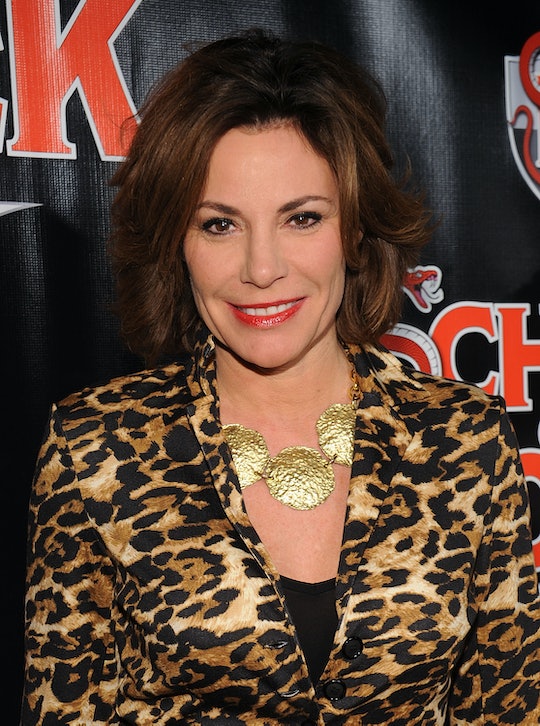 After a three-episode long build-up on The Real Housewives of New York, Bethenny finally revealed the secret she'd been agonizing over about Luann de Lessep's fiancé Tom d'Agostino Jr. It turns out she'd been sent pictures from an anonymous source of Tom making out with a woman who was not Luann at the Regency Hotel just days before the couple's engagement party. Bethenny revealed her information to Luann, who was quite understandably devastated. Are Luann and Tom d'Agostino Jr. still together? They are, and now we all want to know why in the name of God.

When Luann first gleefully announced her engagement, she was met with extremely reserved enthusiasm from her friends, because it appeared to everyone that there were about 1057 red flags about this guy. And they had blinking red lights and sirens. They'd only been dating for a matter of weeks before they got engaged. He seems to have been less than forthright about his relationships with Luann's close friends, and Ramona did spill some unflattering gossip about him staying in contact with an ex-girlfriend, and even giving her a gold bracelet. Regardless, Luann was head-over-heels and insisted that anything that happened "BL" — that's "Before Lu" — didn't matter.

But the kiss at the Regency was definitely not "Before Lu." It was very much "ATSTAL" — "At-The-Same-Time-As-Lu," and it still didn't seem to matter. After a few tense phone calls, Luann squared her shoulders and declared that she wasn't going to let one silly kiss ruin the rest of her life. I think I speak for the rest of the world when I say, oh, girl, whyyyy. Tom's excuse was first that he was allegedly so drunk he didn't remember the supposed incident, and then that he only drunkenly slobbered on this woman because he and Luann had had a fight. Which, come on.

Luann and I are, sadly, not exactly close friends. I can't pretend to know her motivations or her feelings. But it certainly seems to the other women on the show that Luann simply wants to be married. As Bethenny pointed out, Luann has said she loves being in love, perhaps more than the object of said love himself. Luann has every right to live her life in whatever manner she thinks will make her happy. But I tend to agree with Ramona here when she says "He's just angry he got caught. This is not going to be the first time nor the last." Ramona-esque sentence structure aside, sometimes Ramona is right on the money. We'll have to wait until the reunion to find out just what happened after The Kiss.