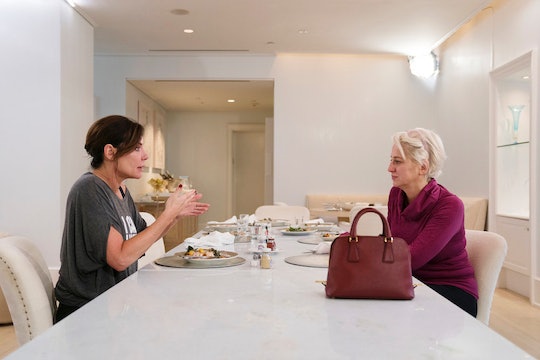 Luann & Dorinda Kick Off 'RHONY' Season 11 In A Bad Place

The Real Housewives of New York City is back and after last season's explosive feuding, fans of the Housewives may be wondering whether Luann and Dorinda are still friends. The Season 11 trailer still contains the word "Jovani," which at this point, should trigger a Pavlovian response to hide under the nearest cabaret table, so it's safe to say they haven't patched things up just yet.

Season 11 opens, as is tradition, on the Housewives enjoying their final days of summer in the Hamptons. Luann just got out of her second stint in rehab — a trip we now know was the result of an intervention at which both Bethenny Frankel and newcomer Barbara Kavovit were present. Meanwhile, Dorinda and Luann haven't spoken since last season ended.

At Ramona's freshly remodeled Hamptons home, where Dorinda was staying after spending her summer in the Berkshires, she admitted that she still felt hurt by the way Luann had cast her aside after her devoted friendship and support. She actually started to cry over it and Ramona, surprisingly the voice of reason in all this, did her best to remind Dorinda that Luann was in a super fraught place and not capable of thinking outside herself until she sorted through her sobriety.

In September, during the Q&A portion of one of Luann's cabaret shows, a fan inquired after her relationship with Dorinda. "What she said hurts still," Luann replied, according to People. "I’m just trying to process it and get over it right now. I’m not ready to take the Band-Aid off. I’m still scarred from it!"

"I’m in a good place," she added, saying, "I don’t need heckling." But even though Luann acknowledged that she wasn't ready to hear criticism from one of her best friends at that moment, she did express a desire for reconciliation. "I do [want to make up with her]. I love Dorinda," Luann assured the audience. "We’ve known each other for a long time. I’m sure we’ll come to a good decision."

Honestly, it sounds like space is best for these two right now. Dorinda still feels hurt and wants an apology, and Luann's boundaries are crystal clear: she's looking out for herself and keeping herself healthy. If anything, she would like an apology from Dorinda.

Around the same time as Luann's cabaret show, Dorinda appeared on an episode of the web series Adulting By Bravo, and defined a toxic relationship as one in which "the after-relationship starts to occupy you more than the actual relationship you’re having," according to People.

"I always say, how do I feel five minutes after I walk away from the person," Dorinda told host Chelsea White. "Do I feel good? Do I feel better about myself? Do I feel loved? Do I feel confident. Or am I doing one of these, 'Why’d she say that? Well, that didn’t make me feel good?'"

It genuinely sounds like neither of these women have space for the other's emotions at the moment, but, of course, RHONY is going to shove them in the same room and force them to hash it out anyway. You can see how successful they are when RHONY airs Wednesday nights on Bravo.