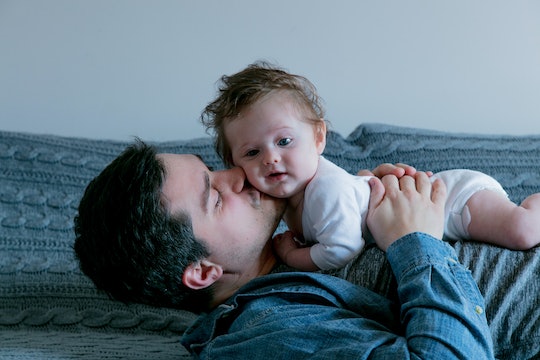 Turns Out, Millennial Dads Might Be More Involved In Raising Their Kids Than Gen X Dads

The enduring reputation about millennials seems to be that the generation is mostly made up of young, entitled twenty-somethings who spend a lot of time going out to brunch. But given that those on the older end of the cohort are now only a few years away from turning 40, the reality is that the only avocado toast many of us are eating is whatever's leftover from our kids' breakfasts. The millennial parenting experience is definitely different from years past though, and that's especially true when it comes to fatherhood. Are millennial dads more active in child-rearing than Gen X dads? The data is pretty interesting.

When it comes to raising children, there is generally a fair bit of overlap between Gen X dads (who, according to Pew Research, are now between the ages of 36 and 53) and millennial dads (currently ranging in age from 22-37). For one, they both seem to be more supportive of an equal distribution of labor in both marriage and parenting than previous generations, and both groups also seem to take their roles as dads seriously. But younger dads do differ from their older counterparts in some significant ways, and it's changing the way they're raising their kids.

If your partner is a Gen X or a millennial dad, then you're hopefully already aware that, overall, dads from both groups are more likely than previous generations to take on active caregiver roles, as well as a greater share of household responsibilities. Statistically, Pew Research found that dads in 2015 reported spending about seven hours a week caring for their kids and about nine hours on household chores on average — and while that may still be much less than mothers (who put in 15 hours a week on child care, and 18 hours a week on housework), it's a big increase from what their dads and grandfathers did.

Dads in 1965 clocked nearly three times less as many child care hours as 2015 dads, for example, and around half the number of hours doing housework. And these days, both dads and moms are more likely to lament the challenges of work-life balance: over half of the number of working dads surveyed said balancing work and family life is "very or somewhat difficult" for them to do.

Another trait both groups seem to share? The increased likelihood that dad will actually be responsible for the bulk of the child care. Since 1989 (aka, probably your own dad's generation if you're a millennial), the number of stay-at-home dads has nearly doubled, according to Millennial Magazine. And though that doesn't necessarily mean that all of those dads were staying home by choice, the number of dads responsible for child care also increased from only 5 percent in the same year, to 21 percent in 2012 — in other words, a sign that both Gen X and older millennial dads are likely more comfortable than their own fathers were with being the primary caregiver.

Despite those encouraging trends, Gen X and millennial dads aren't entirely alike. For one? Millennial dads view parental leave as a priority in ways that previous generations really haven't. In recent years (and particularly in competitive industries like technology and finance), companies have been expanding their parental leave policies to attract and retain younger employees, according to The New York Times, mostly because both millennial moms and dads want to be home more with their children. In fact, a 2015 global study of 9,700 full-time workers by Ernst & Young found that 86 percent of American millennials said "they'd be less likely to quit [a job] if paid parental leave is offered," while 38 percent said they'd be willing to relocate to another country if it meant they'd get better parental leave options.

Unsurprisingly, technology has also changed the way millennial dads parent compare to Gen Xers. An October 2015 survey by TIME and SurveyMonkey polled more than 2,000 American parents under the age of 18, and found that millennial parents were much more likely to post about their kids on social media, were twice as likely than Gen X or Baby Boomer parents to feel inadequate about their parenting thanks to social media, and were also more likely to feel overwhelmed by the sheer amount of parenting information available to them. But there were positive differences too: the TIME survey found, for example, that millennial parents were much more likely to make a point to purchase gender-neutral toys (half of all millennial parents said they'd done this, compared to 34 percent among both Gen X and Baby Boomer parents).

Another upside of technology? Millennial parents are perhaps more well-informed about parenting and child development than ever before, according to The New York Times — simply because, well, we can pretty much Google everything. Yet that may also translate into greater parental anxiety, particularly among millennial dads. According to Florida-based marketing company, SKUlocal, millennial dads say they feel a lot of pressure to be the "perfect parent" — even more than millennial moms do. The desire to be involved in their children's lives also means that many millennial dads say they'd turn down promotions or raises if it meant they'd spend less time with their kids (a big shift from the dad-as-breadwinner days), and more millennial dads regularly handle family tasks that were traditionally taken on by moms (think grocery shopping, and overseeing the kids' appointments and social calendars).

Even without looking at the facts and figures, though, it's not a huge leap to conclude that dads today are much more involved in the day-to-day care parenting tasks than men used to be back in the day. But even when comparing millennial dads to Gen X dads, it's clear that parenting young kids today is different than it used to be even a decade ago.

Although on the surface the amount of time spent by Gen X and millennial dads on child care duties may not be massively different — and though it was Gen X who first ushered in a level of comfort among men when it came to being primary caregivers — millennial dads seem to be focused on finding new ways to be as involved as possible, even if they aren't stay-at-home-dads. And while there still might be a long way to go to close the gap that remains between parenting workloads between women and men, millennial dads are at least making some really good progress.