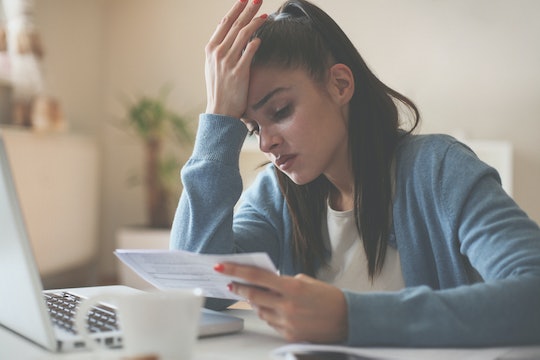 Here's Why Millennial Moms Might Be Angrier Than Any Previous Generation

The United States is a dumpster fire. It's been that way for the last decade, but the flames have grown and burned brighter over the last two. Living in this country, for anyone who isn't a cisgender white man, has been a gamble — like playing a game of craps in the back room of a roadside bar in the middle of nowhere. Suffice it to say, there's a lot to be pissed off about, for parents and non-parents alike. And that begs the question: Are millennial moms angrier than previous generations? Yes. Or, more appropriately, YES.

No research exists — or is at least searchable — that specifically looks at and quantifies millennial mom rage in comparison to older age groups. But, generally, women today are far more indignant than their parents' generation, according to an ELLE survey published last month. So it'd be fair to say, then, that this holds true for millennial parents, too.

Translated to numbers: 57 percent of women who responded to ELLE's survey said they felt more anger in this year than 2017. When broken down by political parties, it's Democratic women who hold more of the rage — 76 percent of them, to be exact. (Republican women, on the other hand, are more likely to bottle up their anger, according to ELLE.)

And there's a lot — A LOT — for younger moms to be angry about, despite their political affiliation. The millennial generation around the world shoulder higher childcare costs, higher education costs, higher housing costs, and higher interest rates, while also having less wealth, lower wages, poor job security, and fewer benefits, according to the World Economic Forum.

It's much harder to raise a family in today's economy than previous generations, whether you're single, married, in a long-term relationship, or co-parenting. So much so, that parenthood could soon be out of reach for millennials who want to have children, according to The Los Angeles Times. There are plenty of reasons why millennial women are not becoming parents, but not being able to afford to have kids when you really, really want to shouldn't be one of them.

Yet, it is — and with good reason. As pointed out by The Los Angeles Times, not only are childcare costs climbing, but so is health insurance and out-of-pocket medical expenses. For many millennial moms, paying for their kids' medical needs — whether it's routine care or for a preexisting condition — is a daily struggle. Treatments become unaffordable, so kids become sicker, and you, as a parent, feel like failure. Try not being angry at that.

Caring for children aside, millennial moms have plenty to be angry about when it comes to their own health and well-being. When every dollar is being squeezed, you have no time to take care of yourself. Self-care, or the illusion of self-care, is but a dream other people can afford. No amount of bubble baths are going to make your paycheck bigger, or health care more accessible, or job opportunities more equitable, or education more affordable. Sure, in the moment, it's nice to relax. But then reality hits.

And here's that reality: Millennial moms are living in an economy that was bankrupted by the very generation that mocks and judges them. Previous generations lived in a richer country, one that had a reasonable cost of living with a relative living wage. For the most part, they could exist without worrying about losing their job because of weakened labor rights. For the most part, they could exist without the constant fear that they and their family would be out of house and home.

But that's just not the case today. So how could millennial moms not be angrier than previous generations? What other choice do we have?