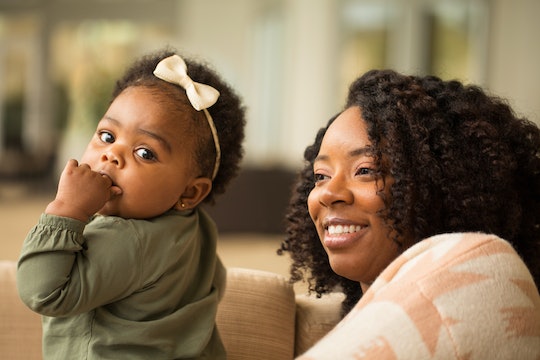 Way More Millennial Women Are Becoming Stay-At-Home Moms Vs. Gen Xers, But Why?

The number of millennials who are also moms is rising every year. And as the generation that grew up during the age of the internet and the explosion of such technology advancements as the iPad and countless apps to entertain kids, it's not exactly a surprise if moms from this demographic do parenting a little differently than mothers from earlier generations. That's why it might be shocking to hear that in one area, millennial moms are more "traditional" than you may expect. The number of mothers who do not work outside the home is actually on the rise, so are millennial moms staying at home more than Gen X moms? Recent data suggests that may be the case.

The number of working moms almost doubled between the time Generation X babies were little and as they grew up and had kids of their own, according to the Pittsburgh Post-Gazette. The numbers jumped from 16 million working mothers in the United States in 1979 to 30 million in 2009, when the Post-Gazette reported on the demographic. Generation X was born between 1965 and 1976, according to The Center for Generational Kinetics. So the kids born in that generation were among the rising numbers of moms who chose to work outside the home.

But the number of mothers who don't work outside the home rose to 29 percent in 2012, up from a "modern-era" low point of 23 percent in 1999, according to Pew Research Center analysis of government data. At the same time, more than one million millennials are becoming mothers each year, Pew reported in another article. And according to at least one report, more people in that demographic believe that moms should stay at home, which might help to explain why more millennial mothers seem to be doing just that.

A report by sociologists at the Council on Contemporary Families found that, in 1994, 58 percent of students surveyed in their senior year of high school did not agree with the claim that the best household arrangement involves a male breadwinner with a female homemaker, according to The Cut. However, by 2014, only 42 percent didn't agree with the statement.

But this attitude doesn't mean that moms of the millennial generation believe stay-at-home moms are necessarily any better at being moms than working mothers. In fact, since 1994, the belief among young women that women who work are just as good moms as stay-at-home mothers "has continued to inch up," according to The New York Times.

So why does it seem like more millennial moms are staying at home than Gen X moms? A growing percentage of stay-at-home mothers say they are home because they can't find work — at 6 percent, up from 1 percent in 2000, according to Refinery29. But it also seems like a lot are just staying home because they want to, and that's OK too.

The thing is, this change in attitudes about mothers staying home might not necessarily be a bad thing. So don't freak out just yet if you're worried about the implications of it all when it comes to feminism and women's rights. Jennifer Owens, the editorial director of Working Mother Media, said mothers looking for a better work-life balance, for example, could actually be a great thing when it comes to changing the American workplace. Owens told CNN:

They're going to demand more. They're already asking questions about the 24/7 always on (work life). They're asking for flexibility already as a given, and you know what, they're not even asking for it. They just expect it. And amen to them.

And those attitudes might translate to things like better family leave polices, or more of a demand for maternity leave that is more flexible about letting moms stay at home with their kids, at least for a little while. In an ideal world, both maternity and paternity leave would be commonplace for American workers.

But even if a lot of millennial women have kids and decide to stay home for longer than, say, an extended maternity leave, that's fine too. In the past, many moms didn't have the same education and experience as fathers did, and staying home after having kids was sometimes in reaction to that. But now, one-quarter of stay-at-home mothers actually have college degrees, according to The Economist. It seems like a lot more moms have the ability and the skill set to work outside the home, but many millennial moms are choosing to stay home anyway.

That could actually be a really great thing when it comes to the cause of gender equality. In the end, it's all about having choices, and if more millennial moms feel that they have the choice to stay home than Gen X mothers, that's really a win for all moms and women.