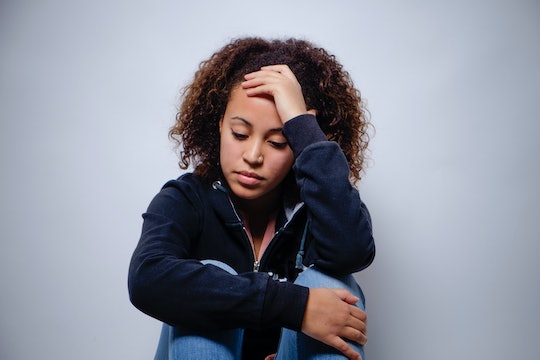 With more and more research dedicated to understanding mental health, people are looking to make sweeping statements comparing one generation's mental health to the next. Millennials have earned a name for themselves in media and many are wondering: are millennial moms suffering higher or lower rates of depression and anxiety than previous generations?

Ever since the 1930s, young people in America have reported increasing anxiety and depression, according to The Cut. Employee assistance program provider Bensinger, Dupont, and Associates conducted research that concluded one in five millennials report experiencing depression. This is an increase from the 16 percent reported by Generation X employees and Baby Boomers.

For young women in particular, depression is seeing an increase. A study in the journal Pediatrics found that between 2005 and 2014, the number of depressed teens jumped by more than half a million — three-quarters of which were teenage girls. In comparison to men, millennial women are experiencing burnout at much higher rates, as reported by Fast Company.

This trend of millennial women leaving their jobs before 30 can’t be completely attributed to motherhood, as some might attempt to place blame there. A report published in the Harvard Business Review noted only 11 percent of women choose to leave the workplace permanently to have children.

Millennials have higher rates of depression overall and suffer from frequent stress, according to USA Today. An online survey of 2,020 adults ages 18 or older, conducted by Harris Interactive for the American Psychology Foundation, found that 39 percent say their stress has increased in the past year. USA Today reported that 52 percent say stress has kept them awake at night; and, more than any other generation, millennials report being told by a health care provider that they have depression or an anxiety disorder.

Using a 10-point scale where 1 means “little or no stress” and 10 means “a great deal of stress”, USA Today reported that the 2012 average was 4.9 throughout generations. But, for millennials alone, the average increased to 5.4.

So, why are millennials so depressed and anxious?

It’s easy to make cracks about a generation, casting blame on either helicopter parents, laziness and narcissism, social media, or all of the above. But, the reality is, nobody has a clear reason for why rates of depression have been seeing such a steady increase. And along with that, there are a lot of obstacles in place when discussing mental health throughout generations. For example, the words “depression” and “anxiety” themselves have different meanings throughout time, along with different social implications. Additionally, mental health care access has never been great, with barriers existing along intersections of race, class, gender, and etc. Some of these barriers can be seen in depression amongst African Americans, with whom health care professionals have to navigate cultural understandings of mental health.

Jean Twenge, a social psychologist at San Diego State University, believes this trend of increased anxiety and depressions suggests that modern life is not good for mental health, according to The Cut. In order to by-pass some of the methodological obstacles, Twenge relies on surveys and inventories asking respondents about specific symptoms frequently correlated with anxiety and depression, The Cut reported. Some of the best data, then, comes from the Minnesota Multiphasic Personality Inventory (MMPI), which has been administered to high school and college students since the 1930s, with many questions about symptoms.

In a 2009 paper in Clinical Psychology Review, Twenge noted a clear increase in symptoms associated with anxiety and depression, based on MMPI questions. According to The Cut, Twenge believes that smaller families, higher divorce rates, and people getting married later in life may be having a negative affect.

But, the problem can also be tied back to methodology and access. An increased number of Americans are able to receive mental health services, with an increase of mental health professionals from a variety of backgrounds. For some, one of the barriers to access was the simple fact that there weren't any therapists who looked like them. Additionally, mental health issues can manifest differently based on someone’s cultural background, so having more information about that allows a larger number of people to be diagnosed by doctors and recorded in surveys.

It’s unlikely that there will be a definitive answer for the increasing anxiety and depression rates seen over the last generation. But, for now, people can at least be assured that while millennials are seeing higher rates, it’s not an isolated incident. Instead, it’s a trend, and one that will likely continue with Generation Z.