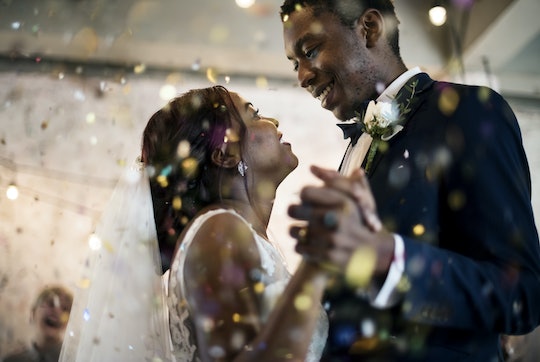 Turns Out, Millennials Are Getting Divorced Way Less Than Gen Xers

Ah, millennials. It’s not news that past generations like to make wild assumptions about the next; from being profiled as lazy and parent-dependent narcissists, millennials have dealt with their fair share of past generations' projections. By far, the main area of criticism for millennials rests in how differently this generation engages with the concepts of marriage and family. To many, this begs the question: are millennial women getting divorced more than Gen X?

In the 1960s, the average age for marriage in America had most brides just a few months over 20. But, for decades, this age has been creeping higher and higher. According to the Pew Research Center, about 6 out of 10 millennials have never been married. In 2017, the average age for marriage was at 27 for women and 29.5 for men. Although two-thirds of never-married millennials still say they want to be married, they cite a variety of reasons as to why they haven’t jumped the broom yet, including waiting for financial stability and feeling they are too young to settle down.

Given that millennials are getting married less than their predecessors, including Gen X, it’s fair to assume that they can’t be getting divorced faster, either. But, for those who don’t like assumptions and take comfort in data, the divorce rate actually peaked in the 1970s and ‘80s. In order to understand the trend of divorce, you have to know a little something about each generation outside of millennial stereotypes.

Generations are actually difficult to track because, outside of the Baby Boomers, there’s no universally agreed upon age range. Even for millennials, who most people are imagining as 20-somethings, the age can extend between 22-37 depending on the source. I was born in 1995, which is the year most publications argue over where to sort. It’s best to define generations by a combination of age and shared experiences.

For example, the Silent Generation is typically regarded as being born between the mid-1920s to the early-mid 1940s. But in terms of marriage and birth rates, the defining influence for this generation was growing up, or coming to age, during World War II. Marriage rates typically decline during times of war so, after it ended, the Silent Generation married in droves. They established a young bridal age of 20 years old, with high birth rates. Of the women born between 1931 and 1935, 94 percent gave birth three times or more.

To the Silent Generation, marriage and big families were the norm. What followed was the major shift of the early Baby Boomers (born 1946-1965), who came of age during the 1960s. Not every Baby Boomer was free-rolling or living easy, but a good portion of them were dedicated to nurturing a variety of counter-cultures and questioning the status quo.

Where the Silent Generation was defined by World War II, the Baby Boomers were equally defined by the Vietnam War and redefining their own agency. Many of them were married before their 30s and, interestingly, that peaked divorce rate I mentioned earlier? It correlates with the first wave of divorce in the Baby Boomers. In fact, Baby Boomers have gained attention for “Gray Divorce,” in which more people are seeking divorce (and possible recommitment) after their 50s.

Gen X has birth years commonly defined as anywhere between 1965-1984. Now, remember, divorce rates peaked in the 1970s and 1980s, which is when Gen X children were being born. As a result, even if they didn’t grow up in a split household themselves, Gen X children could not escape the influence of divorce. So, similar to millennials now, Gen X wasn’t actually in a rush to get married or establish large families.

According to recent research, waiting to marry actually hints at lowering divorce rates, with scientists suggesting 28-32 may be the ideal age range. We can give Gen X props here, because with only one-third of them being married by 30, the divorce rates have seen a fairly steady decline since the 1980s. However, the same credit then has to be given to millennials.

As of now, millennial women aren’t getting divorced more than their Gen X predecessors. And it makes sense, given that Gen X actually parented a good chunk of the new generation. Each generation is influenced by the ones that came before, whether they care to admit it or not, and millennials are clearly still influenced by the peaked divorce rates of the 1980s.

Instead of doubting millennial women, it’s time for us to reconsider what marriage has to mean. While we may romanticize times of the past, where people were actually getting married like the Silent Generation, we have to remember the economic insecurity that forced many women to remain in marriages. For generations, marriage was largely a business transaction, and now we’re in a new generation.

Marriage can be for love, for economic stability, or for something entirely new. But, for now, it’s up to millennials to figure that out for themselves.

More Like This
Elmo Talks About Getting His Covid Vaccine In A Cute New Video
'Caillou' Is Officially Getting A CGI Reboot Whether People Like It Or Not
Can The Baby Have That?
What Exactly Are Minions, Anyway ?