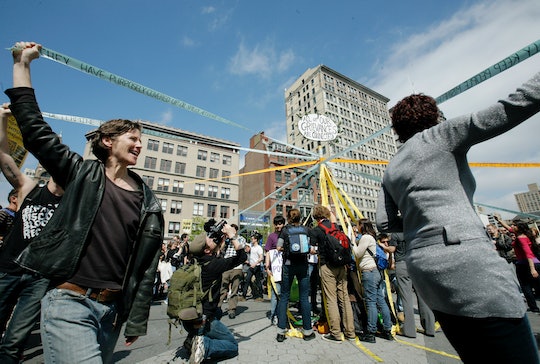 Are Millennials Really Less Religious Than Other Generations? It Appears That Way

Who can forget being forced to go to church on Sunday morning as a kid when you wanted to stay indoors and watch cartoons? Whether you attended church regularly as a child or not, you always remember having that one friend who could not hang out on Sunday morning because they had to go to church. But what about our current generation? How religious are we? There's been plenty of debate on the subject. So it's hard not to wonder: Are millennials really less religious than other generations?

As Generation X grows older and the Millennials begin to raise their own children, research has shown that Millennials are hauling their tots to church less often than their predecessors — which in a way does confirm the fact that we're less religious than previous generations. A recent study carried out by YouGov on behalf of Deseret News, a Salt Lake City based news outlet, its results were conclusive to that statement.

The study conducted was about the importance of Sabbath Day observances in people's lives. YouGov surveyed 1,000 Americans from different religious, racial, gender and age groups. What the study found was that only 41 percent of Millennials consider Sunday to have religious meaning, compared to 51 percent of Generation X, 56 percent of Baby Boomers, and 58 percent of the Silent Generation.

Perhaps one of the biggest conclusions from the study was that only 22 percent of Millennials report attending church and that Millennials are significantly more likely to work on Sundays compared to any other generation.

This study, albeit new, does not reach new conclusions. Many organizations have previously reported that Millennials are in fact less religious than their parents' generation and their grandparents' generation by a wide margin. However, the idea that Millennials are less spiritual is still up for debate: In a 2014 study conducted by the Pew Research Center, researchers determined that while Millennials may pray less than previous generations, they are just as spiritual. The also discovered that 52 percent of Millennials surveyed have a "absolutely certain belief in God" and 67 percent believe in heaven — a number largely in line with previous generations.

However, in 2015, research conducted by San Diego State University about religion and generations over the span of 50 years found that the divide is truly generational.

"Unlike previous studies, ours is able to show that millennials' lower religious involvement is due to cultural change, not to millennials being young and unsettled," said San Diego State University psychology professor, Jean Twenge.

According to The Huffington Post, the lack of religious interest in millennials could be due to a emphasis on being your own person in today's society.

"We found that religious involvement was low when individualism was high," Twenge told The Huffington Post. "Individualism is a cultural system that places more emphasis on the self and less on social rules. Individualism can conflict with religion, especially as religion usually involves following certain rules or being part of a group."

There you have it. Millennials are, in fact, less religious than previous generations due in part to individualism and the lack of observance of a specific religious day. However, while these studies are representative of a sampled group, they don't speak for everyone — so if you still feel that twinge of happiness at your weekly Sunday sermon session, keep on going... and more power to you.