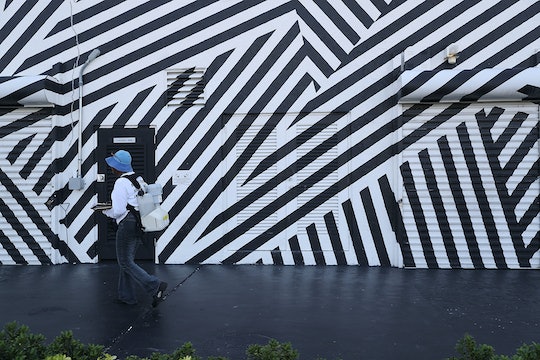 Are Mosquitoes In The US Carrying Zika? There Are Known Local Transmissions In Miami

Although there are several ways you can become infected with Zika, including sex, blood transfusions, and most devastatingly, from mother to child, as far as scientists can tell so far, Zika's primary means of transmission is the Aedes mosquito. Are mosquitoes in the U.S. carrying Zika? There are only two areas in the U.S., so far, with reported local transmission of Zika—Miami Beach and the Wynwood neighborhood, both in Miami, Florida.

So now it's up to killing the mosquitoes to keep the Zika virus from spreading further. And as Bloomberg reported, that means trucks blowing insecticide over wide swaths of Miami. "The trucks headed to the area’s two Zika hot zones: Wynwood, Miami’s hip arts district, where the U.S.’s first locally transmitted case of the virus was discovered in July, and a 20-block stretch of Miami Beach," Bloomberg reported.

According to the New York Times, only the female mosquitoes actually bite people, while the males drink nectar.

"In the female, the virus travels from the gut to the salivary glands and is injected into the next human victim," The New York Times reported. "When a mosquito bites, it first injects an anti-coagulant saliva so blood does not clog its strawlike proboscis." Either way, they're all getting rained on by bug spray.

In addition to generous use of insecticides, the Miami Herald reported that the Florida Department of Health is also telling residents to eliminate standing water to keep the mosquitoes from breeding. It also suggests screening doors and windows to keep mosquitoes outside, and, when outdoors, using bug spray and keeping skin exposed.

Here's a map of the specific areas with reported local Zika transmission.

The Centers For Disease Control has issued travel advisories telling pregnant women to stay away from the Wynwood and Miami Beach areas of Miami to avoid contracting Zika. Pregnant women are especially at risk. Getting Zika while pregnant has been linked to a severe birth defect, microcephaly, which leaves babies severely brain damaged for life, the CDC has concluded.

While the virus appears to be contained for the moment, here's a map from late June showing all of the places in the U.S. that Zika mosquitoes live. And it's a stark reminder of how vulnerable we are to a more widespread outbreak.

Until a vaccine is developed, the only way to control the spread of Zika is through controlling the mosquito population. And with funding to fight Zika stalled in Congress, bug spray might just be the best we've got. But that's takes money too.

“It’s very hard to fight an epidemic when you don’t have money,” CDC chief Dr. Tom Frieden said, according to Bloomberg. As of Aug. 30, Bloomberg reported that the CDC has already had to borrow the $194 million it has used to fight Zika, but he said there's almost nothing left to borrow. Let's hope Congress can end the gridlock before the money totally runs out.