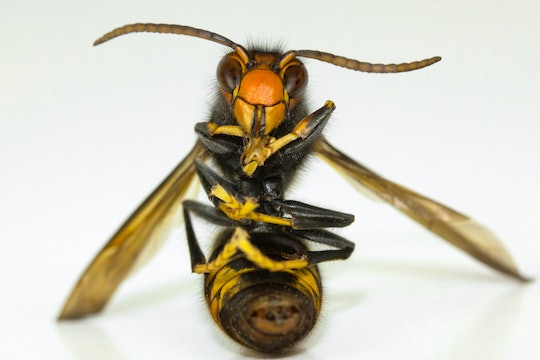 Murder Hornets Have Been Spotted In The U.S. & Here's What You Need To Know

A large hornet with a rather terrifying nickname and the potential to devastate the country's already dwindling bee populations has been sighted in the United States for the first time. But are the so-called "murder hornets" deadly to humans and what do parents need to know about them? Named the Asian giant hornet, this isn't an insect you'll want to encounter on your next outdoor adventure — whenever that may be.

The Asian giant hornet, known colloquially as murder hornets and within the scientific community as Vespa mandarina, are the world's largest hornet at 1.5 to 2 inches long. In comparison, both the western yellowjacket and the western honeybee grow to be anywhere from 10 to 16 or 15 millimeters in length, respectively.

But along with being large, the Asian giant hornet, spotted in the Pacific Northwest region, is also one of the more dangerous and potentially deadly hornets out there. "The toxicity of the hornet venom is actually less than the toxicity of a honeybee venom milligram per kilogram," Tim Lawrence, scientist and associate professor at Washington State University (WSU) Island County Extension, tells Romper. "The problem is the volume [of venom they release] and the fact that the hornet can sting multiple times."

With a stinger that is longer and more dangerous than a bee's — CBS News warned a murder hornet's stinger can penetrate traditional beekeeping suits — just one sting from a murder hornet can pack a painful punch to humans. According to Seth Truscott of WSU's College of Agricultural, Human and Natural Resource Science, murder hornets can deliver nearly seven times more venom in one sting than a honey bee. What's more, while honeybees die after they've stung a person, murder hornets can sting multiple times, making them a particularly pesky and dangerous pest.

"Their stings are big and painful, with a potent neurotoxin," Truscott wrote in a WSU Insider post. "Multiple stings can kill humans, even if they are not allergic."

YouTube personality Coyote Peterson, who hosts the show Brave Wilderness, reported still feeling the effects of a murder hornet's sting some 12 hours after being stung. "I'm in a daze, I feel like I'm sick, my body is definitely fighting against the venom right now," Peterson said, adding that he'd also experienced nausea, intense swelling, and a searing pain that eventually morphed into a serious itching. Peterson's co-hosts concluded it was the worst reaction Peterson had ever experienced from a sting or bite.

Conrad Bérubé, a beekeeper and entomologist in Nanaimo, British Columbia, also reported feeling sick after being stung by a murder hornet. Bérubé told The New York Times he experienced body aches in his legs similar to those experienced when battling the flu. He also described the murder hornet's sting as the most painful sting he's experienced.

How Do You Treat A Murder Hornet Sting?

First, if you find yourself facing one or more Asian giant hornet that seems ready to attack, it's recommended to get away from them as quickly as possible. A WSU fact sheet shared with Romper advised against running in a straight line as Asian giant hornets are capable of flying at speeds of 19 to 25 miles per hour. Instead, researchers recommend running in a weaving patter around any available trees or bushes in an attempt to confuse and evade a pursuing hornet. When possible, retreat inside a vehicle or closed structure.

As for treating stings from an Asian giant hornet, Lawrence recommends seeking emergency medical care and taking many of the same immediate first aid measures that you might take after being stung by a bee. "I'm by no means a physician, but taking antihistamines, putting ice on it, are all good first aid measures," Lawrence tells Romper. "And then getting to emergency medical treatment as quickly as possible would be highly recommended, especially if stung multiple times."

According to Lawrence, there's no hard and fast rule as to how many times an Asian giant hornet has to sting you before their sting becomes fatal. "It's all dependent on the individual," Lawrence tells Romper, adding that children and individuals with a smaller stature may face a greater risk as the danger stems from the volume of venom a person receives in comparison to their size.

Where Have Asian Giant Hornets Been Spotted?

Although native to temperate and tropical areas of East Asia, South Asia, Mainland Southeast Asia, and parts of the Russian Far East, murder hornets have been spotted in Washington state, according to The Washington State Department of Agriculture (WSDA). The state verified at least four reported sightings of murder hornets in December 2019. The invasive hornet was also spotted in at least two different locations in British Colombia in the fall of that same year, according to WSDA.

How Concerned Should I Be?

While multiple stings from a murder hornet can be potentially deadly to humans — these hornets kill an average of 50 people a year in Japan, according to The New York Times — the hornets pose a greater risk to the United States' native honeybee species. According to the WSDA, murder hornets attack honeybee populations, entering a "slaughter phase" in which they decapitate bees and feed on larvae and pupae before taking their hive as their own. "A few hornets can destroy a hive in a matter of hours," the WSDA explained.

"If it becomes established, this hornet will have negative impacts on the environment, economy, and public health of Washington State," the WSDA warned, adding that people should "use extreme caution" if they believe they have spotted a murder hornet and to immediately report the sighting to their state's department of agriculture. Those who are allergic to bee, wasp, or hornet stings are advised to never approach a murder hornet.