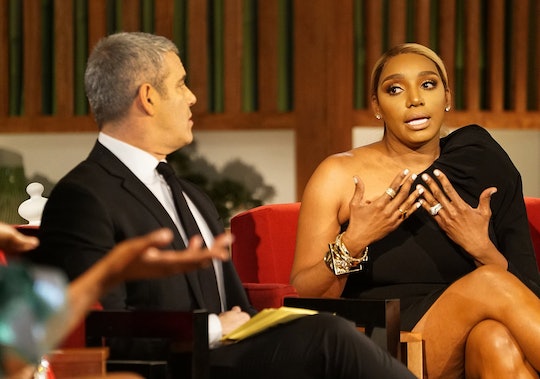 Nene & Cynthia Are Hashing It Out On The 'RHOA' Reunion Special

Nene Leakes and Cynthia Bailey have had a solid friendship throughout Season 11 of Real Housewives of Atlanta, but it looks like things may be taking a turn. Through social media, the two have dropped hints about a rift in their friendship, which has fans wondering, are Nene and Cynthia still friends on RHOA?

In an Instagram Live session on Mar. 12, Nene went on a rant about her former bestie, which was captured by the Atlanta Black Star. "You gon’ have to watch the finale to see what it is that she does,” Nene says during the session. “Cynthia’s done a lot of stuff, in my opinion, on the down low [that] is very sneaky and underhanded. I’m just telling you the truth."

In the same Instagram exchange, Nene added that she didn’t hate Cynthia, but that she would only consider her a co-worker from now on. "I don’t have no hate in my heart for Cynthia,” she said. “We are co-workers from this day forward. I don’t have any reason to not speak to her, I’m happy to speak to her. But anything else further than that, no."

But, that wasn’t the end of NeNe’s choice words for Cynthia. She went on to call her former friend a liar, saying that she "lied and lied and lied and lied," but Nene didn’t go on to clarify what Cynthia may have lied about. Nene also unfollowed Cynthia on Instagram, and most of her other RHOA castmates.

Cynthia hasn’t been as harsh in her criticism towards Nene. When talking to Page Six earlier this month, Cynthia said that she was hopeful the friends could work through their differences, and even appreciated the fact that Nene was wearing her brand of sunglasses. "I’ve always been a friend to her, and if she’s really my girl like she’s claimed to be my girl then we could get past this,” she said. “But I noticed she was wearing my eyewear, though, so I need to tag Cynthia Bailey eyewear. I appreciate that. It’s good when we support each other even when we’re mad at each other.”

In a Mar. 14 interview with US Weekly, Cynthia said she didn’t harbor any bad feelings towards Nene, and said that she hoped they could reconcile. “I have nothing bad to say about her,” Cynthia said. “I hope that we talk about it and work through it … I think we can. I hope we can move past it.”

It’s not clear exactly what happened between Nene and her colleagues, but in a sneak peek of the RHOA Reunion Special, fans can see just how upset Nene is. In the clip, Cynthia is telling Andy Cohen that she’s tried her best to be a “good friend,” and then is later heard shouting, “If NeNe wants to fall out over this petty-ass sh-t then let us fall out over it.”

When it comes to the world of reality TV, it’s hard to tell what’s real and what’s drama. But Cynthia and Nene’s friendship has been through a lot over the years, and I hope that eventually, the two figure out a way to work past whatever issues they are facing.