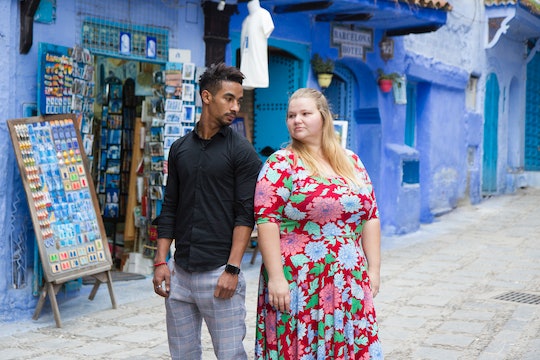 Nicole & Azan From '90 Day Fiance' Are Dealing With Some Difficulties

Nicole Nafziger and Azan Tefou first appeared in Season 4 of the TLC series 90 Day Fiancé, and their relationship faced some difficulties right off the bat. Nicole's family wasn't super supportive of her pursuing the relationship. Nicole also couldn't quite adjust to the cultural differences between her and Azan, who is Moroccan. They got engaged nonetheless, though Nicole could not afford to sponsor his immigration to the U.S. With so many obstacles in the way, are Nicole and Azan still together?

Since Azan couldn't come to the U.S., Nicole decided to move to Morocco to be with him until they could come to the U.S. together. However, in June of this year, Radar Online revealed that the wedding was off — but the relationship wasn't. Nicole's stepfather Joe Fouraker explained that they decided not to get married because the timing wasn't right, but that didn't mean they wouldn't get married sometime in the future. In Joe's opinion, Nicole intended to return to Morocco at some point; she'd had to come home in the first place because her visa expired, not necessarily because she wanted to.

90 Day Fiancé: Happily Ever After went into more detail about what happened; it seems Nicole did not have the right documents for a Moroccan marriage license, which was another reason she had to head home. "She had to come back here," Joe said. "She was there for almost six months. She is now living with her sister in a mobile home. Her daughter May is with her."

Visa issues weren't the only thing complicating matters between Nicole and Azan. They were also dealing with the fallout of Azan's alleged cheating, which came to light on the show due to some audio recordings. But that didn't stop Nicole from wanting to be with him. As Joe told Radar Online:

[Azan] had an explanation and said, 'That was before I met you.' She believed him. She wants to believe the best in people. She isn't mature enough to understand people will take advantage of her. She's a foolish young lady.

Social media seems to indicate that Nicole is still invested in the relationship, too. In July she posted two pictures with Azan to Instagram, one captioned "I love you forever" with a heart. The other features Nicole and Azan standing with her family; accompanying it, she wrote, "I'm so happy to be surrounded by such amazing people in my life."

Some fans thought the social media posts might have indicated that Azan and Nicole got married after all, but so far neither of them have confirmed that. In Touch Weekly reported that a fan claimed to have seen Nicole in her home state of Florida, but Azan wasn't present and Nicole wasn't wearing a ring. Anonymous fan encounters are impossible to prove without verification from Nicole herself, but the whole situation is kind of perplexing.

It's not clear whether or not Nicole and Azan are moving forward with their marriage plans any time soon. Neither of them has shared their relationship status on social media. But it does look like they're still together and have every intention of staying together. Even if Nicole's family isn't thrilled about it, her stepfather Joe did mention that he thought Nicole would go back to Morocco, where she had left her wedding dress. He didn't know anything about the potential wedding either, but the relationship seems to be ongoing.

Anything could change before 90 Day Fiancé embarks on another season, but for the moment at least, Nicole and Azan appear to be trying to make it work. It might not be easy, but they're still giving it a shot.