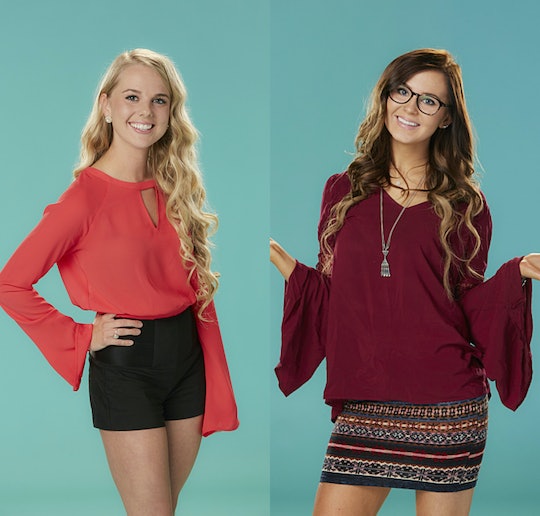 Are Nicole & Michelle Related On 'Big Brother 18'? It Wouldn't Be The First Twin Twist

We're still a few episodes away from our first eviction vote of the season, so let's turn to Big Brother 18 fan theories to fill the time, shall we? My current favorite is the idea that returning houseguest and BB16 alum Nicole Franzel and newbie houseguest Michelle Meyer are secretly related. Any BB fan knows that the show loves a good "two houseguests are secretly related" twist. We, the audience, already found out that two of the BB18 newbies are related to two prominent past houseguests: Paulie is the older brother of BB16 runner-up Cody Calafiore, while Tiffany is the younger sister of Vanessa Rousso, who placed third in BB17.

As we've seen in the first week, both Paulie and Vanessa expressed concern over how the knowledge of who they were related to would affect their relationships with the other contestants and their odds of staying in the Big Brother house. Paulie made the risky but ultimately smart choice to come clean to his fellow houseguests almost immediately, while Tiffany opted to keep her sibling secret close to the chest – though she did end up spilling the beans to Michelle and Da'Vonne, both of whom had essentially already guessed it (unsurprising, given that Tiffany is essentially Vanessa's brunette doppelganger).

The idea that Michelle and Nicole are related (even distantly) is actually supported by a surprising amount of evidence.

For one, the two 23-year-olds are both from Michigan, which could potentially be a big hint that they are, in fact, members of the same family, given that families have a tendency to reside close to one another. For another, their mannerisms and physical appearances are super similar (particularly when they're both wearing their glasses). In one tweet, a BB fan pointed out that even the Big Brother social media team goofed and mislabeled Nicole as Michelle in an article!

Of course, if this theory is borne out, it wouldn't be the first time that the show has thrown some family drama into the mix. In Big Brother 5, as part of the Project DNA twist, two of the houseguests Michael and Nakomis found out that they were actually half-siblings, sharing a father. Dick and Daniele Donato, an estranged father-daughter pair, were, unbeknownst to them, both chosen to compete as houseguests during Big Brother 8.

We'll have to wait and see whether Michelle and Nicole are actually related (and, if they are, whether they're aware that they're related), but even without this twist, there'll be no shortage of drama this season with the newbies vs. returners and new BB Road Kill twists.