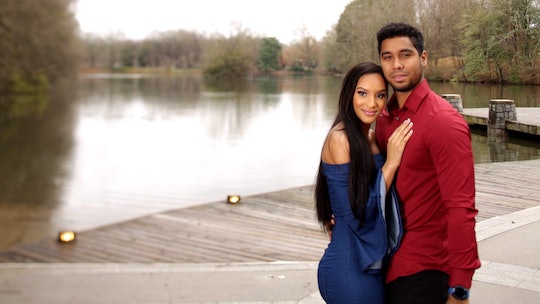 Chantel and Pedro were one of the more explosive pairs on Season 4 of 90 Day Fiancé thanks to the near-constant family drama, so it makes sense that the series would want to continue their story. There's definitely more to explore with these two on 90 Day Fiancé: Happily Ever After?, which airs every Sunday on TLC. In fact, after their last big fight, fans might even be wondering if Pedro and Chantel are still together on 90 Day Fiancé.

If Pedro and Chantel have decided to call it quits, then they haven't made a public statement about it. Rumors abound on social media, as they usually do, but so far there hasn't been any word from the couple themselves. In fact, they recently landed their own spinoff series called The Family Chantel. She announced it on her Instagram account alongside a photo of herself and Pedro. "It's true!" read the caption. "Monday nights in July."

A spinoff series isn't a guarantee that Chantel and Pedro will stay together forever; Newlyweds: Nick and Jessica can speak to that. But it does seem to indicate that they're going to try to make it work for the foreseeable future. Pedro and Chantel are still together, at least for now.

There's so much familial tension happening with these two that it's no surprise it spilled over into its own series. Chantel has had her disagreements with Pedro's family, but they don't impact her day to day life much because they live in the Dominican Republic. Pedro, on the other hand, has to deal with Chantel's family all the time — and they really don't like him. It's difficult to imagine that a status quo that volatile could go on forever; either peace is reached between all parties, or Chantel and Pedro decide to head for Splitsville.

Their social media accounts don't give any indication of trouble in paradise, though. Pedro's Instagram is mostly comprised of selfies, gym or otherwise, but there are some pictures with Chantel, too. Yes, technically his Chantel photos are from 2017, but maybe he doesn't feel the need to document every second of their relationship when TLC does it already. Chantel's Instagram is much more up to date; she makes sure to post plenty of promo for the show, including official photos and trailers. At least online, everything is business as usual for these two.

An exact premiere date for The Family Chantel hasn't been released yet, but it seems like everyone at TLC is excited about it. Howard Lee, the president and general manager of TLC, released a statement about the series that was shared with People. "This is an awesome moment for TLC, as we create a family show based on one of our most popular 90 Day couples, and on a whole new night," Lee said. "Our fans can't get enough of Pedro, Chantel, and their larger-than-life families. For a brand known as the destination for love, relationships, and family shows, The Family Chantel hits the bullseye."

Chantel and Pedro have weathered some ups and downs since they got together, but their story isn't over yet.