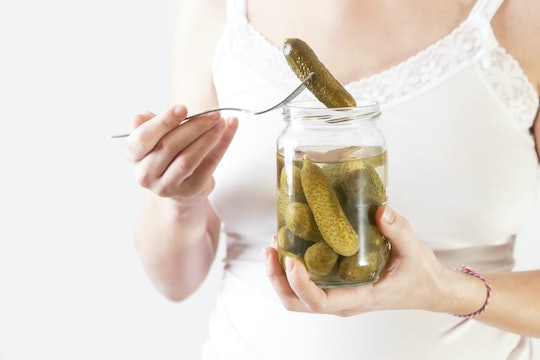 Pregnancy cravings are notoriously strange. It's as if all bets are off the minute a woman tests positive for pregnancy and anything goes. Chocolate shake in the middle of the night? Normal. Saltines and tomato soup for breakfast? Been there, right? However, the one craving that seems to be universal is for pickles. Pickles and ice cream, pickles and peanut butter sandwiches, deep fried dill slices — it doesn't matter. Pickles are the food of growing a baby. But are pickles good for you during pregnancy?

Pickles in and of themselves aren't the healthiest food out there. And it's posited by Frontiers in Psychology that these cravings happen because we've been conditioned to think they're supposed to happen. Therefore, our brain tells our mouths and our bodies that they are craving this thing it's supposed to crave. That means that because you've heard your entire life that you're supposed to crave pickles while you're pregnant, when you become pregnant, you crave pickles. A simpler explanation is that many women crave salty foods during pregnancy, and pickles are salty and delicious. However, what most women don't know is that some of their favorite pickles, like the popular Italian giardiniera, have nutrients necessary for pregnancy that become easier to digest during the high-heat commercial pickling process.

Some foods contain nutrients that become more bioavailable — that is, your body can process them easier — when they're cooked. While home pickling and quick pickling don't serve to make foods more bioavailable, unless you're going as far as to steam the vegetables during the process, the canning process of a commercial kitchen does this quite nicely.

However, this isn't the case for cucumbers and your typical dill pickle. It's only the widely popular Italian pickled carrots, cauliflower, tomato, and bell pepper combination of giardiniera that benefit from this cooking process. They contain a nutrient called lycopene that is made available after these vegetables are steamed. Lycopene is a powerhouse nutrient for pregnant women. As the Women's Health Center of Texas notes, lycopene is not only good for the baby, but also helps prevent preeclampsia in the mother.

Here's the rub, though. You have to take into account how much salt your pickles contain, and shy away from high salt varieties, because that would negate the possible blood pressure related benefits, and potentially have the opposite of the intended effect, according to Healthline. The one surprising health benefit of pickles during pregnancy only applies if you're careful.

I wanted to learn more about your average dill pickle, so I asked nutritionist Katie Heddleston, MS RD to find out if they have any purported benefits that pop up during pregnancy, and she tells Romper, "There really isn't any nutritional benefit for women to eat pickles while pregnant, other than to satisfy that craving if it occurs." Even though that's nothing to sneeze at, as the cravings can be irritating as heck, it's a bit disappointing that we can't shout their benefits to the rooftops and claim some moral high ground for a love of peanut butter and pickle sandwiches that may continue long after we're no longer pregnant. (I swear, it's so good.)

Heddleston reiterated the importance of choosing the right pickle for your health, noting, "...pregnant women should consume pickles with extra water due to their high sodium content. And if a pregnant mother knows she is susceptible to high blood pressure from previous pregnancies, she may want to actually avoid pickles and other high sodium containing foods."

So dill pickles and those delicious deli half-sour pickles aren't a nutritional panacea. And it should be noted that while many women notice that the sour pickles help ease their nausea, the website for Dr. Sears cautioned against eating them on an empty stomach because they induce the production of saliva, which can trigger morning sickness if it hits an empty stomach.

But crunchy pickled carrots and cauliflower? Eat up — you might be helping your body and your heart.