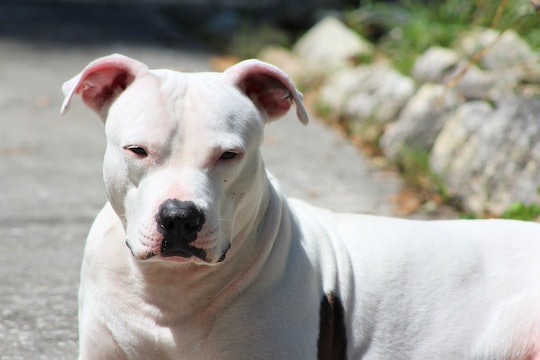 Are Pit Bulls Safe For Kids Under 5?

When my kids were little, one of our neighbors adopted a beautiful American pit bull terrier, and would walk him in front of our home every day. My son loved him and begged for one of his own. As dog lovers, my husband and I had been considering a pet for some time, but the thought of getting a pit bull never once crossed our minds. Our youngest was still a preschooler, and besides, we wondered, are pit bulls safe for kids under 5? The stories we'd heard over the years made us wary of a dog with such a dangerous reputation.

We decided that any breed of big dog would be too much for us to handle at the time, and ended up adopting a tiny Dachshund puppy, instead. But, the question of the safety of pit bulls around small children stayed on my mind, especially after our neighbor had her own baby.

Before getting into statistics, it's important to clarify the term "pit bull." According to WebMD the American pit bull terrier is technically the only true pit bull, although the American Staffordshire terrier and Staffordshire bull terrier are often referred to as pit bulls. The term could also refer to mixed breeds. The data suggests that these three breeds, as well as dogs mixed with these breeds, fall into the one category of "pit bull" when data for dog bites and fatalities is collected.

According to DogsBite.org, a nonprofit public education website about dog attacks and dangerous dog breeds, of the 31 fatal dog attacks in 2016, pit bulls contributed to 71 percent (22) of these deaths, about seven times more than the next closest dog breed. In 2014, Lancaster Online reported that pit bulls made up 41 percent of the 562 dogs on the Pennsylvania Department of Agriculture’s "Dangerous Dog" registry, a database of dogs declared dangerous by local courts. Those numbers alone may give a parent pause before considering adding a pit bull to the family.

Advocates of pit bull ownership believe that pit bulls, like any other dog, are a product of their environment. Sarah Eremus of the Pennsylvania SPCA told Lancaster Online that pit bulls were originally family dogs. As proven by the fact that Petey from The Little Rascals and the RCA Victor dog were both pit bulls, and Helen Keller, President Theodore Roosevelt, and Fred Astaire kept the breed as family pets.

But in the 1980s and 1990s, the breed became a status symbol for drug dealers and gangs. Pamela Reid, vice president of the ASPCA’s Animal Behavior Center in New York told WebMD that pit bulls became popular among people who were looking for a strong, scary-looking dog. Pit bulls were often seen chained up in front of homes and businesses. Sara Enos, the Founder and Executive Director of the American Pit Bull Foundation, wrote in TIME magazine that pit bulls, like any other dog, can develop aggressive tendencies if they are left tethered and unattended, trained with aggressive correction, or allowed roam the neighborhood or escape. WebMd added that dogs who aren't spayed or neutered tend to have more undesirable behavior, such as male dominance aggression. A separate TIME article reported that only about 20 percent of pit bulls are sterilized.

So, does this mean that pit bulls really do get an undeserving bad rap due to irresponsible ownership? It's possible, but the numbers of dog attacks and fatalities caused by pit bulls are concerning nonetheless. Until the statistics change, it may be wise to not to expose your younger children, especially those who are still learning how to properly interact with dogs, to pit bulls.