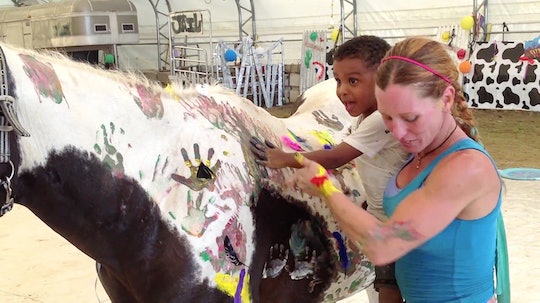 Yes, Pony Painting Parties Are A Thing & Yes, People Are Upset About Them

If you're planning a party inspired by North West and Penelope Disick's unicorn-themed birthday bash, remember to respect the unicorns, people. A new trend called "pony painting parties," in which children draw on real live ponies with colored chalk, is causing a lot of controversy in the UK. While many people argue that pony painting parties are totally kosher, others have pointed out that the activity has a variety of ethical flaws.

It seems as though pony painting parties have been around for years — a 2013 YouTube video shows children not only painting a pony, but also sticking synthetic feathers on the pony. However, the trend has blown up in the last few weeks thanks to a Change.org petition calling for the ban of pony painting parties.

The petition, which has already been signed by more than 64,000 people, urges the UK Parliament to ban pony painting parties. "If we urge children to respect objects: cars, smart phones, house walls/patios but smear animals in paint are we teaching them that living beings matter LESS than objects?" the petition reads. "Allowing children to treat animals as play things risks teaching a bullying, self-entitled mentality with a severe lack of empathy."

A UK-based company called My Happy Equine is at the center of the controversy, Scary Mommy reported. My Happy Equine makes a product called Pony Mane & Tail Chalks, which are supplied to pony party companies.

Romper spoke with a spokesperson for My Happy Equine, who claimed that her products are safe for horses. "All my products are 100% non toxic and vegan friendly," the spokesperson wrote to Romper. "I don't run pony parties but I do supply the products. I also supply products to colleges who use my paints to teach students the equine anatomy, RDA centres and therapy centres. My paints are not only made for 'painting ponies.'" Additionally, Helen Preece, owner of My Happy Equine, told ITV News that children apply the paints with brushes, so the horses do not even realize that they are being painted.

A spokesperson for Diddy Pony Parties, a UK-based company that provides pony rentals for parties, spoke with The Sun about the Change.org petition. The spokesperson told the outlet:

DPP places pony welfare as its highest priority and all activities are supervised by knowledgeable and caring equine professionals. All materials used in our parties are certified safe for use on animals and specifically equines.

Conversely, many animal rights activists feel that it is unethical to exploit animals for human enjoyment. Colleen O'Brien, Vice President of People for the Ethical Treatment of Animals (PETA), sent Romper a statement about the trend via email. She explained that animals are not props, but sentient, smart animals who do not need to be exploited for entertainment when there are alternatives. She said:

The first lesson that a child should be taught is the Golden Rule—to treat others as you would wish to be treated. So if children wouldn't like to be forced to stand still while someone paints and draws all over their bodies, it's wrong to subject ponies to the same treatment. Allowing kids to treat animals like coloring books is a lesson in insensitivity to which no thoughtful parents would expose their children. Ponies and horses aren't party props—they're intelligent, complex animals who should be appreciated for their natural beauty. They're also sensitive and easily spooked—a child might even be kicked by a stressed pony who has been forced to endure a party environment with loud music and excitable kids. Animal exploitation has no place at a children's party, and PETA urges parents to opt instead for cruelty-free activities, such as finger painting or face painting.

A Facebook user named Joe Callister's post about the parties has gone viral over the past week. In the post, he explains that even though the pony painting products may not cause damage to the ponies, it's still wrong to assert human power over animals in this way. He wrote:

It teaches us to objectify and use. It teaches us that if human animals are being made to feel happy, we can disregard the non-human animals. It's disgusting, disrespectful and unjust ... This post is not about welfare/mistreatment or the overall effect the activity has on the pony. It is about abusing power. When we are needlessly commodifying others as a resource for our use, we are abusing our power of abilities.

Even though My Happy Equine's (and other companies') paints may be totally safe for ponies, the issue is more that pony painting parties exploit animals unnecessarily. So for your child's next birthday party, maybe stick to good old fashioned finger painting.