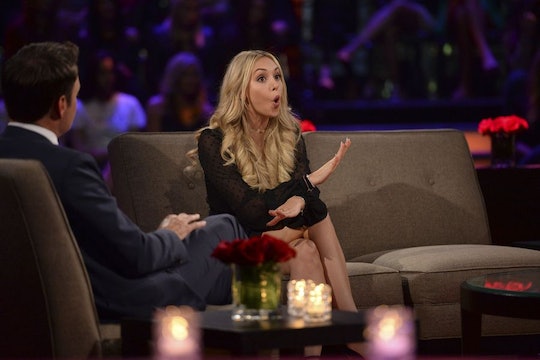 'The Bachelorette' Delivered An Unexpected Reunion

Last season on The Bachelor, cheese pasta aficionado Corinne Olympios was deemed the "villain." Despite the fact that many contestants had problems with her behavior, and that she was constantly talking about missing her nanny, Raquel, she persevered and made it to the top four. But surprisingly, she made an unexpected appearance on The Bachelorette premiere, as one of Rachel's "friends" from last season, giving her a pep talk before her mission to find love began. Was this for real, or just for the show? Are Rachel and Corinne really friends like The Bachelorette made it seem? The show gave viewers an unexpected reunion.

Despite Corinne being the "villain," at the end of the day it could all be editing magic. Objectively, though, it doesn't seem that she and Rachel have much in common aside from their past interest in Nick: Corinne works at her family's business in Miami, while Rachel is a lawyer in Dallas. On the show, they didn't have many scenes together that would indicate they were close. They were, however, in the top four contestants, so they were in the mansion together for the long haul. It's also completely possible that they would hang out, and all the footage ended up on the cutting room floor.

As it turns out, Corinne's appearance on The Bachelorette makes total sense. In an interview with Ellen DeGeneres in February, Rachel talked about how she likes Corinne and the show did not portray her as she really is. "I love Corinne," she said. "Unfortunately, you only get to see some sides of Corinne... I got to see all sides living in the house with her." Not only that, but when she was on Jimmy Kimmel she professed her love for Corinne as well. Viewers can see from Corinne's appearance that they formed a bond in the mansion.

"I was lucky to come out of Nick's season with amazing friends," Rachel said when she gathered Corinne and several other contestants from last season to give advice before meeting her potential suitors. "I feel like you need to totally let your feelings be in control of all this," Corinne said to Rachel. "You need to give them all a chance." That makes sense coming from Corinne, who some viewers last season didn't like from the start for the way she acted. Nick, though, gave her a chance — and she's telling Rachel to do the same thing. The fact that Rachel keeps up with her fellow cast members is sweet, and maybe a sign to come for more appearances this season.