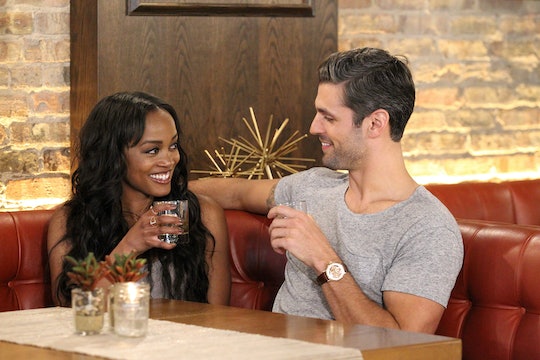 Will Rachel & Peter Find Common Ground On A 'Bachelorette' Engagement?

At this point, I think fans of The Bachelorette would be relieved to know Rachel ends up with anyone but Bryan, but there are definitely plenty of people on Team Peter simply because, well, they love Peter. He's cute, he's sweet, he's had a strong connection with Rachel and some great one on one dates, but that also may not be enough for forever material. So are Rachel and Peter engaged on The Bachelorette? The season has reached that point where things really could go either way.

Fans have not been shy about voicing their dislike for Bryan, but since the season has already been filmed and the ring has already been put on Rachel's finger, fan service isn't really possible. Although Bachelor Nation might not want to hear it, the main advantage I'd give Bryan would be Peter's reluctance to propose, which is a very big one. When Peter dropped that bombshell, Rachel immediately made it clear she wants a husband, not a boyfriend, at the end of this experience. (Did someone not tell Peter the whole point of The Bachelorette when he signed up or something?)

At the same time, their bond from the very beginning is undeniable, and Peter is still sharing super sweet Instagrams of Rachel.

While the show has been airing, Peter's Instagram has been mostly full of pictures of himself working out, traveling, and more working out. That kind of content (though nice to look at) doesn't really provide very many clues as to whether he might be engaged to Rachel as we speak, there are definitely clues from the show in place.

The two admitted they were falling in love with each other, shortly before Peter met her family, which seemed to go way better than Bryan's visit. Rachel has made it clear time and time again how important her family is to her, especially her mother and sister, so their seal of approval will certainly factor at least a little bit into her final decision.

The indecision, of course, hasn't stopped their fan base from being very vocal in their support for the couple. They've been dubbed #Pachel for their 'ship name, and passionate fans are voicing their support through tweets, Tumblr posts, and Instagram edits. Under one edited photo of them, one fan wrote, "Blessing your feed with this #Pachel perfection. This is love. No other way around it." They also hashtagged it with #couplegoals, which is how you know it's real.

We'll have to see how this all pans out in the last episodes, but this fan's fingers are definitely crossed for Peter to be the dark horse of the season.