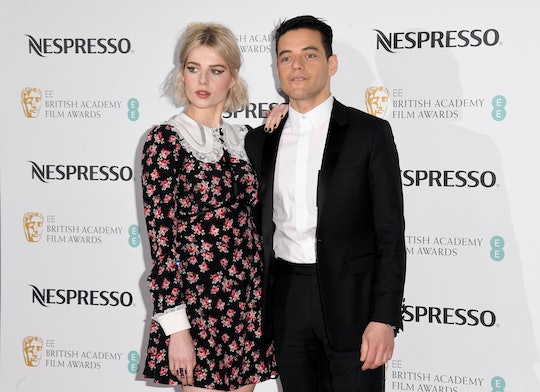 At the 91st Academy Awards on Sunday, fans will see so many of their favorite celebrities take to the red carpet in the hopes of winning an award. Among these people will be stars of Bohemian Rhapsody, which is up for a number of awards, Rami Malek and Lucy Boynton, who could very well walk the red carpet together. And if they, people will likely be wondering if Rami Malek and Lucy Boynton are dating.

In Bohemian Rhapsody — which is nominated for five different Academy Awards — Malek and Boynton star opposite each other as boyfriend and girlfriend. In the film, Malek plays the iconic lead singer of Queen, Freddy Mercury, and Boynton plays his muse, Mary Austin. But these roles weren't too challenging for them to play, because they just so happen to be dating in real life, according to Cosmopolitan.

The initial rumors about their romance date back to almost a year ago, in April 2018, when Malek and Boynton hit it off while filming Bohemian Rhapsody. Rumors were especially fueled after the couple was spotted packing on the PDA in August, as Cosmopolitan reported.

And finally, Malek confirmed the rumors in January, according to Elle Australia, after he won an acting award at Palm Springs International Film Festival for Bohemian Rhapsody. During his acceptance speech, Malek gave a special shout out to his leading lady. Malek said, according to Elle Australia: "Thank you, Lucy Boynton. You have been my ally, my confidant, you are my love. I appreciate you so much."

Awwwww. How sweet is that?! While he didn't flat out say that they are dating, his speech was pretty telling, right?

And since Malek gave that speech, they have not been holding back when it comes to showing off their romance. At the Golden Globes, last month, Malek and Boynton even kissed during the show, according to Cosmopolitan. While some people would refrain from sharing their love with the rest of the world, the couple has every reason to want to share their happiness with others. For starters, the movie they starred in has been getting so much recognition this awards season, and Malek has been winning awards for his performance as Mercury.

And Malek has had nothing but the sweetest things to say about the leading lady in his life. In January, Malek told Us Weekly that the entire cast of Bohemian Rhapsody became "a family" when they were shooting the film, and he had so much praise for their performances. But he was especially inspired by Boynton's performance. "She's such a wildly talented human being and an inspiration," Malek said.

And in October, at the premiere for Bohemian Rhapsody, Boynton only had great things to say about Malek and his talents. According to MSN, Boynton said:

There wasn't much Rami there when I was working with him. It was like walking on to set and 100 percent Freddie every day. So to have that electric energy on set was phenomenal.

But it definitely seems like Rami is 100 percent himself and present in their own relationship, especially after mentioning Boynton in that adorable acceptance speech of his in January.

Only time will tell, however, if they walk the red carpet together at the 91st Academy Awards.